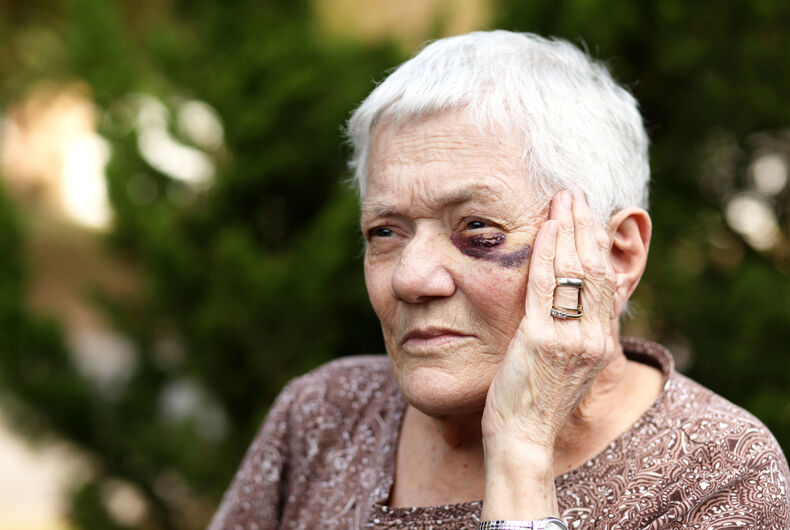 LGBTQ Oregonians over the age of 55 suffer elder abuse at an alarming rate, and the vast majority don’t report it, according to a new study commissioned by the Oregon Human Services Department. Queer elders in the state also suffer from higher rates of poverty, are more likely to have suicidal thoughts, and say that they have been discriminated against in the previous year.

“As a senior retired person, I’m still very much in the closet,” wrote one anonymous participant in the study. “I wish things could be different and that I could have a relationship with a man.”

“We still fall under all the things that happen to older adults,” Mary Rita Hurley of the LGBTQ Aging Coalition told the Salem Reporter. “Then on top of that, particularly depending on how old the older LGBTQ person is, there is still an amazing amount of stigma out there. We still have people in the closet.”

The study is based on two surveys. The first is the Oregon State Behavioral Risk Factor Surveillance System (OR-BRFSS), a long-running survey. Researchers used data from 2013 to 2018 for elders who participated in it, which represented around 30,000 people. 3.4% of older men and 3.2% of older women who responded to the survey said they were gay, lesbian, or bisexual. Not enough participants identified as transgender to reach conclusions about them.

The second survey was the Oregon LGBTQ+ Older Adult Survey, which was conducted earlier this year and involved 1402 LGBTQ people over the age of 55.

And the results are astounding. 42.5% of LGB elders in Oregon are living below 200% of the Federal Poverty Level, higher than the 36.6% of straight people. More LGB elders (10.5% vs 7.2%) said they saw finances as a barrier to getting health care.

This discrimination has a real impact. 21% of LGBTQ elders said they don’t disclose their identity to elder care or health care professionals.

A quarter (24%) of LGBTQ elders said they have faced elder abuse within the last year, but most of those who were the victims of abuse (76%) said they didn’t report it. The top reasons they gave for not reporting it were fears that authorities would be homophobic or transphobic, shame that they were the victims of abuse, and fear that they would have to come out during the process of reporting the abuse.

21% of LGBTQ elders in Oregon said they have thought about suicide in the past year, and LGBTQ elders of color, those living in rural areas, those with lower incomes, and gay men were at the most risk.

LGBTQ elders in the survey were also much more likely to say they smoke or drink too much. Again, gay men, people of color, and those with lower incomes were at higher risk, but it was urban – not rural – LGBTQ people who reported smoking and drinking excessively more.

LGBTQ elders are more likely to need help from social services as they get older, partly because they are less likely to have children and more likely to have no relationship with their families of origin. Many LGBTQ people get help from people who aren’t related or married to them, which means that the caregivers have limited legal power to help if they’re not a designated health care proxy.

38% of LGBTQ elders said they needed food assistance in the previous year and 67% said they needed health and medical services. When it comes to getting help, over half of gay men (70%), queer and sexually diverse people (54%), and transgender people (51%) said they had unmet needs.

“I am scared of retirement and how I will survive in terms of housing,” one participant wrote. “The long-term facility I visit feels completely heteronormative and conservative.”

“There is very little support for transgender women in my age range,” wrote another. “I believe this keeps trans women and trans men, such as myself, from coming out and seeking the care we often desperately need.”

“As a queer older person living in subsidized housing, I feel very removed from any specific support,” another wrote. “There is a large religious population in my community and I don’t feel comfortable. We don’t have choices when applying for housing.”

“While I am out to those close to me, putting up a Pride flag or BLM sign feels unsafe and could put my family at risk,” wrote another participant.

The survey results were presented last week to the Oregon Senate Interim Committee on Human Services, Mental Health, and Recovery, and several lawmakers expressed concern about the data.

“I’d love to partner in any other legislation to really push this forward,” said out state Sen. Kate Lieber (D).