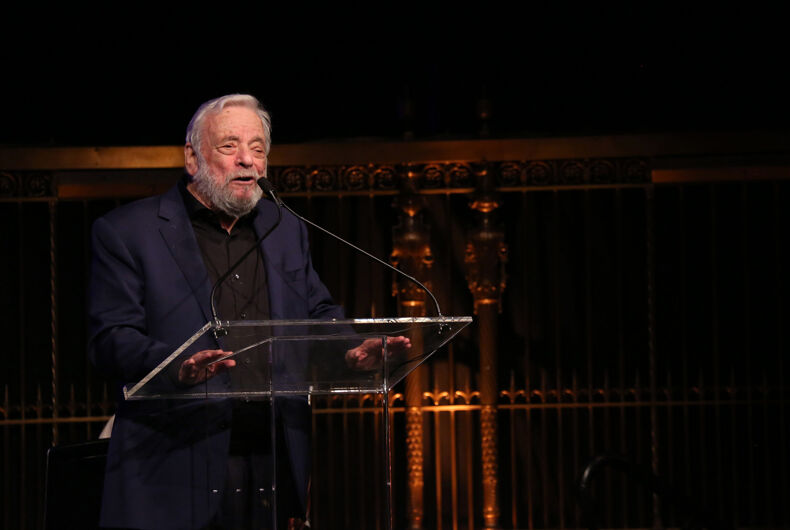 “Alone is alone, not alive.”

Stephen Sondheim, inarguably one of the greatest men to ever write for Broadway, died in his Roxbury, Connecticut home yesterday. The gay composer and lyricist was 91 years old.

Like the bouquets of flowers in front of Kensington Palace from mourners of Princess Diana in 1997 that grew into a small mountain, responses to Sondheim’s death from his Broadway peers and the public at large continue to pile on top of each other, each trying to find a different set of adjectives to better express their sense of loss and praise his greatness: “Incomparable, Pivotal, Towering, Trailblazer, Giant, Titan, Genius, Icon, Legend…”

Were he to be buried with the material affirmations of his accomplishments, Sondheim’s grave would rival King Tut’s. Topping the list would be his eight Tony Awards, eight Grammy Awards, his Oscar, Pulitzer Prize, Laurence Olivier Award, Critic’s Circle Theatre Award, and the Presidential Medal of Freedom from President Barack Obama.

While none of his work reached the financial success of shows such as Phantom of the Opera and Wicked, and some were short-lived box office failures, several of his compositions make up a part of Broadway’s “Crown Jewels” — such as Gypsy, which portrays “Mama Rose” as a straight woman rather than the lesbian she was, or Company, whose main character, Bobby, many still perceive is gay, despite Sondheim’s denials.

A Little Night Music, best remembered for “Send in the Clowns”, which won the Song of the Year Grammy Award in 1976, A Funny Thing Happened on the Way to the Forum, Sweeney Todd, and Sunday in the Park with George are also among those iconic creations.

West Side Story (1957) is clearly his best known and most popular with the public, largely because of its modern take on Romeo and Juliet and several traditionally lyrical songs that left audiences humming when they left the theatre and countless singers a classic to independently record. The 1961 movie adaptation stills holds the record for the most Oscar wins by a musical with 10, and a new version opening next month, directed by Steven Spielberg with a screenplay by gay Pulitzer Prize-winner Tony Kushner, has generated huge buzz and anticipation.

Sondheim said in September that Kushner “has done some really imaginative and surprising things with the way the songs are used in the story, and the whole thing has real sparkle to it and real energy, and it feels fresh. It’s really first-grade, and movie musicals are hard to do and this one, Spielberg and Kushner really, really nailed it.”

Hopefully, unlike the deep-in-the-creative-closet original stage and film versions, new and existing fans will learn through its release how much a product of gay brilliance West Side Story is. Sondheim scholar David LaFontaine has written that the members of the creative team “were all in various stages of coming to terms with their homosexuality in the oppressive atmosphere of 1950s America.” Sondheim would later say that he could only recall knowing four men who were publicly out then.

There should be a stage show or film about all the drama that went into it before the curtain rose on its first performance. Robbins was infamous for the way he treated everyone, and Kert was abused the most. In front of other cast members during rehearsals, Robbins repeatedly called Kert a “faggot.” LaFontaine also believes that much of the libretto and lyrics contain homo-longing elements between the main male characters.

One thing is certain, while the term is never used, “Anybodys,” a teenage girl who identifies as a boy and wants to be embraced as a member of the Jets gang, was Broadway’s first transgender character.

Sondheim was only 25 when he wrote most of the lyrics of West Side Story‘s beloved score including “Tonight,” “Maria,” and “Somewhere.” While his decades as a composer would also make a great play or film, similarly the greatest drama would center around the many years that it took him to accept being gay, a subject that he was long defensive about, although he was known to have confided in a friend when he was 19 that he thought he might be gay.

She suggested a psychiatrist, to which he replied, “I just don’t know if I want to.” He ultimately began having sex with men — but also spent some 25 years in analysis.

Sondheim gave Jones credit for helping him create the musical Passion, and although they would separate after a troubled decade together, they remained very close friends.

In 2004, he began a relationship with actor Jeff Romley, 50-years his junior. “He is a great joy in my life. Once I had tasted the joys of living with someone, I wanted to live with someone else when it broke up,” Sondheim said.

In a 2009 interview, he also said, “If I had to live my life over again, I would have children. That’s the great mistake I made. It’s too late now. The idea of being a homosexual and raising children was one that was just not acceptable until, my goodness, I’d say the 1970s or 1980s. You want to live long enough to see your children grow up, they’re not puppies. The joy is not just to have them, but to watch them change and grow. So, yes, that is a great regret.”

“Alone is alone, not alive,” sings Company’s central character “Bobby,” whom LaFontaine believes “is a product of Sondheim’s subconscious.”