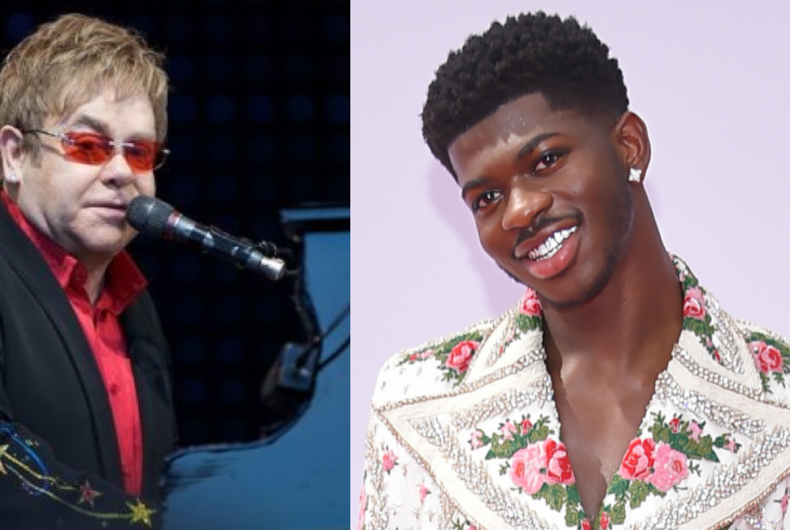 Elton John spoke about his friendship with Lil Nas X while on the radio show Capital Breakfast with Roman Kemp.

He said of his fellow out musician and latest collaborator, “We’ve become quite close, and I just love what he does.”

John talked about how he first learned of Lil Nas X when his first official single, “Old Town Road,” became a sensation.

“Well, I loved him anyway, when he did ‘Old Town Road’ and he came out,” John said to radio hosts Roman Kemp, Sian Welby and Sonny Jay. “This is very unusual for a Black hip-hop artist to come out in a very homophobic area of the music community.”

He then mentioned how he eventually met the rapper and found him “very intelligent, stoic,” and his work to be “outrageous and brilliant.”

“I admired him from afar and then fate brought us together. I think being two gay men in the business – one white, one Black – and he’s got a great sense of humour which you can tell by watching his videos,” John told the radio hosts. “We just hit it off straight away.”

John first met Nas at “the iHeartRadio awards in LA” in May 2021, and he notes, “We just did an advertising campaign in America which was very funny,” referring to the ads the duo have done together for Uber Eats.

“So we’ve become quite close, and I just love what he does.”

Elton John dips his fries in mayonnaise. Lil Nas X does not. The line in the sand has been drawn. Pick a side.

When Lil Nas X & Elton John order dinner, you know it's gonna be fabulous. The only question is who's picking up the tab?

Nas’s debut album MONTERO came out on September 17. It includes the song “One of Me” featuring John playing the piano.

Now, you can find the duo in “Tonight I’ll Be Eating” Uber Eats ads, airing online and on screens across the country.

Editor’s Note: Lil Nas X is a nominee for LGBTQ Nation’s Hero of the Year Award. You can vote now for Nas, or one of the four other nominees — Pete Buttigieg, Elliot Page, Andraya Yearwood, and Dr. Rachel Levine — now until September 30. Vote Here.

Having listened to Montero, @lilnasx has created a masterpiece and I’m so excited that you can all finally hear One of Me.

Thanks @ubereats for all the fun and antics behind-the-scenes 🚀 #ad #Montero #oneofme pic.twitter.com/ZL4PdU31S2

Keep being you, pushing boundaries and letting your true colours show and you’ll always be a winner to me @LilNasX #vmas @ubereats #ad #ballsofsteel pic.twitter.com/f8SxJPno5w

baby Montero will be so lucky to have @eltonofficial as their godfather 👨🏾‍🍼💕more tomorrow @ubereats #ad pic.twitter.com/R0ADHWvCM9