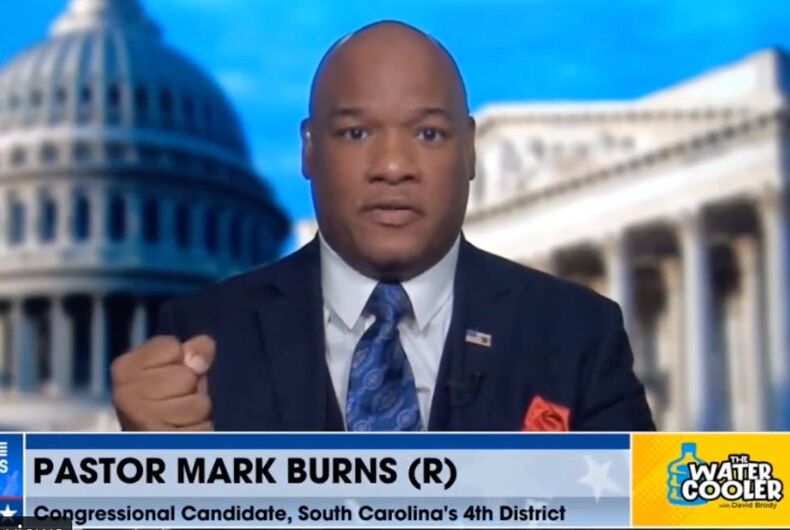 Mark Burns, a fiery pastor and former Trump surrogate, is running for Congress as a Republican in South Carolina. The televangelist con man’s popularity with the former president was undiminished even after he was exposed as a fraud.

The Christian Taliban preacher staked out an extremist position on law and order during a recent interview. He thinks that everything “contrary to God” should be illegal in his perfect “Christian nation.”

Related: Trucks are driving around in Texas with huge signs that declare “Trans lives are precious”

“It’s not just about being Republicans, it’s about being a conservative Christian who believes this is a Christian nation. And any policy that is contrary to the word of God, we need to remove it from mainstream America and make it illegal.”

Burns walked out of an interview with CNN reporter Victor Blackwell after being confronted about the wild claims he had made about his background. While lying is definitely prohibited in the Bible, Burns had claimed he was a former army reservist (he was not), a member of a prestigious fraternity (he was not), a college graduate (he is not), and was in the process of getting a Master’s degree at a theological seminary he wasn’t enrolled in.

Burns admitted he might have “overstated” his resume after claiming his website bio had been hacked before he walked out of his church, leaving the CNN crew behind in the empty building. Burn’s church had a pulpit, a curtain, a camera, and two tables with a handful of folding chairs. There were no congregants.

The humiliated pastor huffed out of the interview, saying he was being singled out because he is Black.

MAGA pastor Mark Burns, who is running for Congress in South Carolina, says that "this is a Christian nation and any policy that is contrary to the word of God, we need to remove it from mainstream America and make it illegal." pic.twitter.com/4j8oxoavhg

The pressure to be thin as a non-binary person