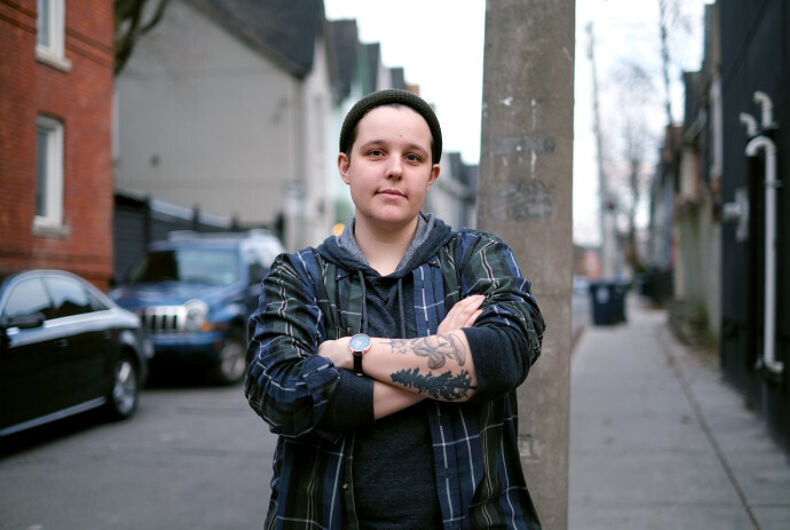 Em is a non-binary person speaking out the pressure they feel to be thin.Photo: Emily Bashforth

Unrealistic beauty standards are pervasive in all areas of society. However, non-binary people face unique pressures to look a certain way in order to be accepted. Restrictive ideals surrounding androgyny and thinness often leave trans, non-binary and gender nonconforming folk feeling invalidated and uncomfortable within their identity. This has led to a spike in eating disorders amongst trans youth, and prolonged battles with gender dysphoria.

25-year-old Em identifies as trans, genderqueer, transmasc and non-binary. They are also fat. They have known they are genderqueer for over four years, but continue to explore their relationship with their gender.

Despite feeling assured in their identity for several years, Em often feels that they fail to meet a non-binary beauty standard.

“There is a widely accepted image of the skinny androgynous AFAB [Assigned Female At Birth] white enby [non-binary] that is most people’s first conception of what non-binary looks like. I think this image gets held up because it is the most palatable in our current culture of patriarchy and white supremacy. The truth is, there should be no general understanding at all of what non-binary looks like. The only way to be non-binary is to not identify as binary female or binary male. Anything outside of or between that can be grouped under this umbrella label and can look however a non-binary individual wants,” they share.

Em explains that the goal of non-binary presentation always seems to be androgyny, and there is something about fatness that we have decided is not androgynous.

“On the surface level, there are obvious things like fat AFAB folks are more likely to have larger, harder to conceal chests, and to have fat sitting in places like hips that create a curvier, ‘feminine’ body type. But deeper than that, I’m convinced there is a relationship between the way that fat binary folks are expected to perform gender to a higher standard in order to be deemed attractive, and how to be androgynous you must not be fat at all.”

Em feels the pressure to be thin in order to be non-binary has “definitely muddied” their gender journey.

They find it much easier to present as masc and to identify with maleness, “because it is widely accepted that men can be fatter than women and still be considered attractive.”

19-year-old Alex echoes that standards in the fashion industry take a toll on non-binary people simply being able to exist as themselves.

“A lot of mainstream non-binary people are thin, including actors and influencers. As well, I think LGBTQIA+ people are expected to be thin because we’re supposed to be fashionistas, and there is a widespread issue within fashion that clothes only look good on thin people, and that ‘skinny’ is synonymous with ‘stylish.’”

Alex admits that the expectation to be thin as a non-binary person can be overwhelming, and they want people to know that non-binary people aren’t some type of mass produced doll.

“There’s an image that non-binary people are ‘supposed’ to conform to. This constrains me so badly from wearing what I want to wear, or experimenting. My mental health has really suffered as a result of this, and I fear abuse when I go outside as other people look at my body.”

So, how does Alex practise self-care when the pressure to squeeze themselves into a mould mounts up?

“I think sweatpants are the greatest invention ever. They allow me to walk around the house without seeing my body. But also, if I need to go out, I can still put together an outfit that makes me feel hot. It’s just important for people to do what is comfortable for them, because you are with yourself your whole life. You have to look after yourself.”

Anna, 22, knows all too well the feeling of needing to be thin in order for society to recognise them as non-binary.

On top of unaccepting partners and being misgendered by parents, they battle with depression and an eating disorder, mental illnesses that are only exacerbated by pressures to be thin.

They’re currently in a place of finding their true self, but this proves difficult when the media and misconceptions perpetuate the androgynous non-binary stereotype.

“I feel a lot of androgyny is connected to looking like an adult boy. I was born in a female body that can’t just turn into a male body. My genetics prevent that. Yet I have breasts and hips that are sexualised and visual female body parts and make people see me as female, which I don’t want. I’m neither a man nor a woman.”

Anna shares that trying to reframe their own transphobia provides comfort when the pressures to look a certain way get loud.

“I am who I am. I matter. My identity matters. I find reading about other enby and trans people also helps a lot and reminds me I am not alone with this. I also purchased a binder recently, which brought me gender euphoria, since I can now hide my breasts. I wear it when I feel really uncomfortable in my female body.”

They also want society to take the focus away from gender, allowing things to just be rather than labelling them as ‘male’ or ‘female.’

“I want to scream at the top of my lungs that non-binary people exist. We are real. We are not a trend. We finally have the vocabulary to express ourselves so, please, don’t just tolerate us, accept and respect us.”

Health and Wellness
fatphobia, non-binary people, pressure to be thin