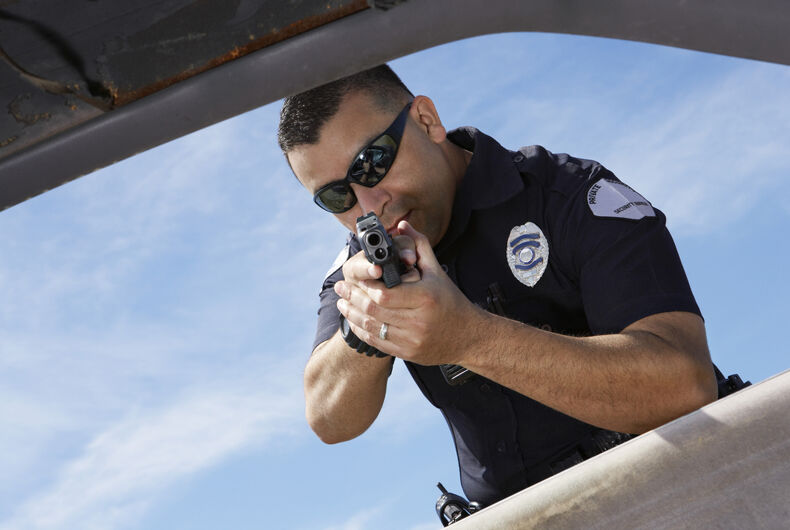 Multiple drag queens are speaking out after becoming the victims of dangerous swatting pranks while live streaming on Twitch.

Swatting is the act of making a false police report in order to get police to go to a person’s home. Victims often find themselves surrounded by multiple gun-wielding officers. In 2017, a swatting prank even led to the death of a Kansas man, Andrew Finch.

Related: Bullies forced trans teen to expose himself in bathroom. Police refused to do anything.

Elix, a member of the Twitch drag queen streaming collective the Stream Queens, is one of six queens who has been swatted since September, NBC News reported.

The incident at Elix’s Las Vegas home took place on November 9, while she was in the middle of live streaming to her 58,000 followers. Police suddenly showed up at her property and demanded she come outside. When she complied, she emerged to four guns pointed at her.

Elix was placed in handcuffs and told someone had called 911 and said she had killed her brother and was about to kill herself, too.

Elix has resolved to remain on the platform and not let bullies scare her off.

I am the 5th drag queen to be swatted within the month. What do we all have in common? We all fall under the LGBT umbrella and play DBD on Twitch.

There are no protections for streamers that go through this, or help.

We only have each other, stay safe. pic.twitter.com/i7LiLzbzjR

Others, however, have felt they have no choice but to quit.

24-year-old Jupiter Velvet, who is trans, left her role as a full-time streamer after she was swatted in September and told by police that no action could be taken in response.

“For a trans girl like me, my options are somewhat limited,” she said. “I really relied on Twitch, and now I have to figure something else out.”

Velvet is now relying on OnlyFans and sex work to make a living.

Before the series of swatting incidents occurred, marginalized groups were already feeling unsafe on Twitch. In September, they held “A Day Off Twitch” to call attention to the abuse experienced on the platform by marginalized communities.

A Twitch spokesperson said that “hate and harassment are unacceptable” and “prohibited by our Community Guidelines.”

“We are always gathering community feedback to inform this process,” they said, “as well as expanding educational resources like our Safety Center and Creator Camp programming, to better ensure that Community members have access to vital information that keeps them safe. Our work to improve safety is never-ending, and we will have more updates to share before the end of the year.”

While some drag queens have expressed the need for Twitch to do more, others have said it is police officers who need to better understand the dangers and realities of swatting. More than one drag queen, including Elix, said they had warned police that they might be swatted, but it didn’t stop their homes from being surrounded.

In the meantime, the Stream Queens are doing their best to support and warn one another of potential dangers on the platform.

“I hope that through these amazing people people persevering in the face of hate,” said Stream Queens founder, Deere, “we can inspire people to still be strong and be themselves in spite of anyone trying to stop us or shame us for being genuine and honest.”