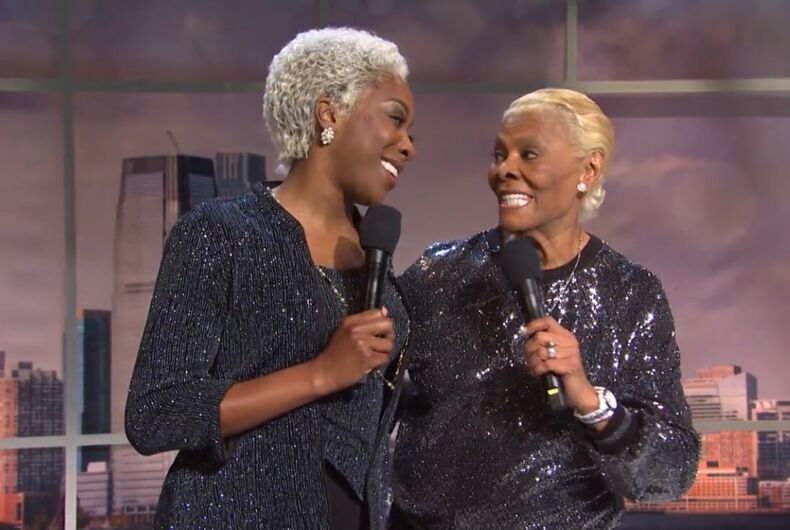 Succession star and former child actor Kieran Culkin hosted the latest episode of Saturday Night Live, and while his character in the HBO drama is notably ruthless, the long running sketch show got ruthless last night, too. While SNL easily had some of the show’s most amusing and applauded sketches in years, it was legendary singer and the recognized Queen of Twitter Dionne Warwick actually who stole the show.

Ego Nwodim played Warwick in a sketch of the mock “Dionne Warwick Talk Show,” giving Miley Cyrus an award for posing topless in a magazine recently and asking Ed Sheeran (last night’s musical guest as himself) why Elton John calls him all the time but not her. Finally, Nwodim’s Warwick became “tired of interviewing people who are not icons.” So she bought out an undeniable icon: herself, the real Warwick.

While out SNL cast member Punkie Johnson portrayed Warwick’s niece and digital strategist Brittani Warwick, Nwodim’s Warwick asked everyone the most important questions on her mind. Even if they didn’t pertain to them.

She asked the real Warwick, “Why are you perfect?”

The real Warwick replied, “My darling, I am not perfect. I’m just very, very good.”

The duo then sung Burt Bacharach’s “What the World Needs Now” together to a rousing cheer from the studio audience.

Culkin’s episode was a knee-slapper right from the opening sketch when Virginia governor-elect Glenn Youngkin — portrayed by Alex Moffat — quite literally tries to avoid being associated with Donald Trump, played way too accurately by Johnson in his SNL debut of the impression, on FOX News with Judge Jeanine Pirro, played by Cecily Strong.

A later sketch featured the inside of the men’s bathroom with Culkin, out cast member Bowen Yang (whose birthday was Saturday), and then a surprise appearance from former longtime SNL cast member Tracy Morgan.

Coming at you live from pretty much any men's restroom that's ever existed pic.twitter.com/FpiL8FmaIu

Ed Sheeran, who was potentially going to miss the show because he contracted COVID-19, made the show and performed as planned. Culkin — who noted in pre-show promos that his name would be Kieran Sheeran if he married the singer — had a nice call back to his last time on the show 30 years ago, accompanying his older brother Macaulay Culkin when he hosted in 1991.

Goober the Clown
(who had an abortion when she was 23) pic.twitter.com/1rFv6UrPGu