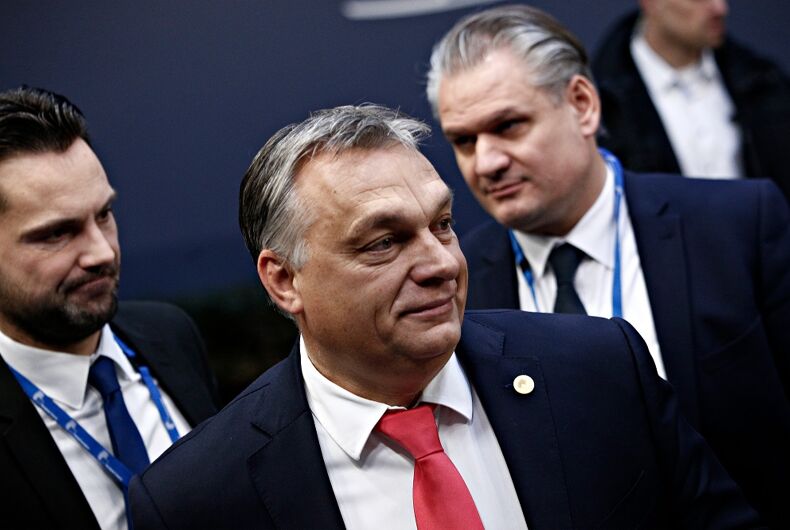 Most western nations are appalled by Hungary’s slide into authoritarianism. Over the course of ten years, the central European country went from being a democracy to a nation where Prime Minister Victor Orbán holds power like a monarch.

But there’s one group that isn’t upset by the destruction of Hungary’s democracy: the American right-wing. If anything, the right sees in Hungary a blueprint for bringing authoritarianism to the United States.

“If you care about Western civilization and democracy and families, and the ferocious assault on all three of those things by the leaders of our global institutions, you should know what is happening here right now,” Fox personality Tucker Carlson said at the outset of a week’s worth of broadcasts he hosted from Hungary last summer.

Carlson presented Hungary as a kind of antidote to the US, fawning over Orbán and never mentioning his crackdown on journalists and political opponents.

Hungary is appealing to the American right because its descent in authoritarianism came gradually and in full sight. Indeed, Hungary still has all the trappings of democracy, but none of the reality.

There are elections, which are ‘free’ in a sense because the ballot boxes aren’t stuffed. But the deck is stacked so heavily against the opposition parties that they never have a chance.

The Hungarian media is essential a propaganda machine, and the government surveils journalists who dare criticize Orbán. Parliament is a rubber stamp, granting Orbán enough broad powers that he can use to rule by fiat. The  judiciary has lost its independence, functioning under a newly created office run by a political appointee.

All of this is simultaneous to Orbán echoing his the hate-filled rhetoric that bring a smile to the right wing around the world. He has called refugees “Muslim invaders,” trafficked in anti-Semitic themes (particularly aimed at liberal philanthropist George Soros, who was born in Hungary), and regularly touts “Christian values,” even though the Pope himself has criticized Orbán’s policies.

Orbán uses rhetoric that would fit right in with today’s GOP. He regularly returns to the theme that real Hungarians are under threat from people of different races and ethnicities, echoing the Great Replacement, a white supremacist conspiracy theory — but with a Hungarian twist.

“Now they want us to voluntarily hand our country over to others,” Orbán has said. “They want us to hand it over to foreigners coming from other continents, who do not speak our language, and who do not respect our culture, our laws or our way of life: people who want to replace what is ours with what is theirs.”

Of course, attacking LGBTQ people is a critical ingredient in Orbán’s toxic stew. Under the guise of an “anti-pedophilia” law, the government has banned schools and the media from talking about gay people. The country’s constitution was amended to define marriage as being between a man and woman only. The government effectively erased transgender people by banning people from legally changing their gender.

Hungary has become a racially homogenous, anti-Semitic, and anti-LGBTQ universe where judges are partisan hacks and the leader can do whatever he wants — does this ring any bells?

It’s no wonder that the American right is in love with Orbán. He’s created the country that they want America to become. Conservative Christian thought leaders, especially right-wing Catholics like Rod Dreher, see Hungary’s authoritarianism as the proper response to a society they feel is hostile to their views.

“I don’t believe anybody is coming to kill us social and religious conservatives,” Dreher told the New Yorker. “But it is beyond clear to me now that the woke left, which controls all the major institutions of American life, will use the power it has to push people like me to the margins, and congratulate itself for its righteousness in doing so.”

Of course, a lot of folks on the right actually do believe that the government is coming to kill them. The threat Dreher and his fellow religious conservative see is a more diverse, accepting society, and one that is much more secular. The only way to turn that tide is to seize the reins of power the way Orbán has and make society over into the image conservatives hold so dear.

If that means getting rid of the will of the majority, so be it.