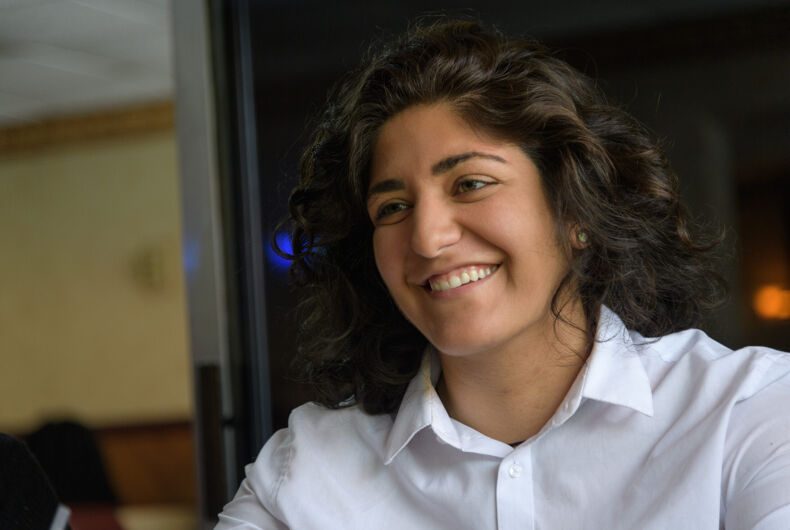 The Atlanta City Council Candidate told LGBTQ Nation that they come from generations of political activists.

Related: Is Minneapolis ready for its first queer mayor? Because she’s ready for big change.

Their father, in fact, fled from Iran to the United States after being blacklisted for fighting for a free and fair democracy. It was he who taught Bakhtiari the importance of standing up for your community.

“I was raised marching in the streets,” Bakhtiari said. “I was raised serving in homeless shelters and seeing extreme levels of poverty.”

Bakhtiari’s extensive community organizing and social justice work have taken them to 26 countries, where they have helped refugees build new homes, worked with sex-trafficking victims, volunteered at orphanages, and more.

They have also worked on several community initiatives at home in Atlanta, including voter mobilization, toy drives, and food drives. Currently, they’re working to bring sustainability programming to the city’s public schools, as well as career training education.

“We want to fast track our kids into jobs that pay them living wages and provide them with benefits,” they said.

I am thrilled to share that I am officially announcing my run for ATL City Council in 2021! I hope to earn your support your prayers, and your vote over the coming year. https://t.co/dSnFFPfzW1

Running in the city’s 5th district, Bakhtiari could become the first out queer Muslim elected official in Georgia history. After struggling with their identity growing up, they said breaking this barrier would mean everything.

“I didn’t come out to myself until I was 23, but I knew I was different when I was in preschool. The idea of being able to be elected getting to be my whole self is never something I thought would be celebrated.”

They hope their campaign encourages a more diverse range of people from underrepresented communities to run for city government.

“Humanizing struggle, humanizing trauma, humanizing poverty, and not having an Ivy League education is really important to me,” they said. “Because I don’t want politics to be gatekept anymore. I want everyone to realize their story is important and that everyone has something to contribute.”

So cheers to the queers. Whether you’ve come out or not, your identity is valid and your existence is an act of resistance. #NationalComingOutDay

This is Bakhtiari’s second attempt at the City Council seat. They first ran in 2017 and said they’re giving it another shot because things have only gotten worse since then.

“We’re in the midst of a pandemic, we have the largest income gap in the country; We’re supposed to be a gay mecca of the South yet our city government was sitting on [millions] in HOPWA funds [Housing Opportunities for Persons with Aids] which weren’t being released; we had an uptick of people forced onto the streets and made homeless and the city was doing little to nothing about it.”

Helping the city’s homeless population is a huge priority for Bakhtiari. When the pandemic began, they served as Emergency Homeless Response Coordinator for the nonprofit Partners for Home. In this role, they helped manage a project to transform a hotel into a low barrier shelter for those at high risk of Covid-19.

“Being on the ground level of those operations only further confirmed to me that there was a lot left to be desired,” they said, “and there was very little political will for long term solutions and just really reactionary policies, especially when it came to our most underserved community.”

A lack of long-term investment in minority populations only leads to the erosion of community trust, they said. “So I ran to create proactive policy.”

I'm hosting a blood drive this Thursday 10/14 with @LifeSouth! 11am-5pm at Argosy in EAV. All donors will receive a $10 gift card 💸 Sign up at https://t.co/q1sXtTCj0z, walk ins also welcome #GiveBlood #SaveALife

If elected, Bakhtiari will prioritize building low-barrier homeless shelters, meaning ones that have little to no requirements for entry.

They also want to establish a system that would provide legal services to those facing evictions and foreclosures.

“Our LGBTQ populations, our BIPOC populations, they’re the ones facing the highest rates of predatory buying and the repercussions of predatory lending right now, so a big priority for me would be making sure they actually have access to the representation they need to fight these cases.”

Above all, Bakhtiari believes in empowering communities to speak for themselves, and in making Atlanta a beacon of progressivism.

“Atlanta in many ways is leading so many changes statewide, but I do believe that this next cycle of council, if we elect the right people, that it could lead to Atlanta becoming the star example of what proactive progressive municipal government can look like in the South, and that can change everything.”

#NationalComingOutDay Thread: My coming out story, like many, has been long, winding, and ever-unfolding.

Anti-LGBTQ abortion opponents are getting more extreme. These 4 political moves could stop them.