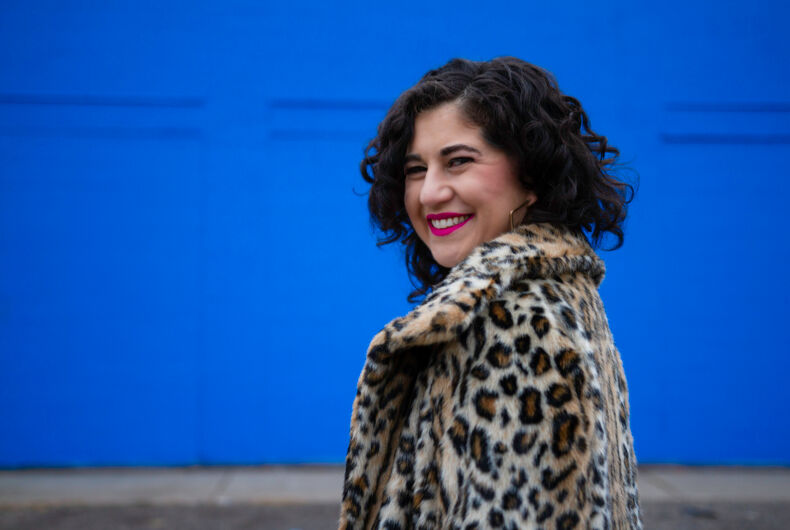 To Sheila Nezhad, being queer means being a world builder.

The longtime community organizer and Minneapolis mayoral candidate would be the city’s first out queer mayor. With a focus on reimagining policing and public safety, she told LGBTQ Nation that launching Minneapolis into the future requires “radical compassionate imagination,” which being queer has given her.

“[Queer people] have had to imagine and build families, homes, jobs, and the way we do safety outside of traditional social systems for years…What we have now is a system of policing that we’ve been doing for 150 years, and it continues to bring violence to our communities, and especially to our trans communities and LGBTQ communities of color.”

“We’re going to have to imagine something new, and it’s going to be a little bit scary, but as a queer person, when I came out in 2010, I had to imagine a lot of new ways of doing things as well.”

But Nezhad has done a lot more than imagine. For three years, she has worked as a policy organizer for Reclaim the Block, an organization that lobbies the city to reallocate the police budget toward more community-oriented programs. A self-described “big budget nerd,” her motto is “from the streets to the spreadsheets.”

What would you do if you were the mayor? Sheila went to Third Avenue Food Market in Steven's Square to hear from folks about their visions for the city. We need people’s voice in city government.

At Reclaim the Block, Nezhad and her colleagues helped create an Office of Violence Prevention that focuses on hyper local safety strategies across the city. They also helped form mental health response teams that will launch this year.

“Minneapolis is at the precipice of change in policing and safety for the nation,” she said. “So I’m running because I have been a community organizer for the last decade, and I’ve seen the transformation and imagination and care being led by people on the ground, and our leaders have really failed to match that energy.”

Minneapolis is indeed the epicenter of the national conversation about the role police should play in society. It is the city where George Floyd was murdered by police officer Derek Chauvin in 2020, setting off a global wave of Black Lives Matter protests and bringing the conversation about defunding the police to the forefront. In the wake of the protests, the Minneapolis City Council announced plans to eliminate the city’s police department, though the plans ended up reduced to more modest budget cuts.

This November, Minneapolis residents will vote on a ballot initiative that will decide whether the Minneapolis Police Department will be disbanded and replaced with a public-health focused department of public safety.

Nezhad’s opponent, current mayor Jacob Frey (D), opposes the ballot measure and has instead been pushing for an increase in police funding. Since the death of George Floyd, he has been criticized repeatedly by activists and city council members for stalling their efforts to redesign the city’s public safety system.

If we end up not being able to change the charter, how else can we make changes to policing and public safety? One big way is through the city budget!

We can fund the things we need to thrive, not just survive. Join us! Register here: https://mailchi.m pic.twitter.com/Cf8TYD2E6g

If the vote does not eliminate the police department, Nezhad says it is still possible to make changes to policing through the city budget. Her vision for a safer city is to increase funding to areas like housing, mental health care, and youth programming.

“All of the things that build healthy communities and prevent violence and harm,” she said. “My vision…is building safety by meeting people’s basic needs and coming up with ways of addressing violence and harm that don’t involve guns or cages.”

My north star is organizing led by Black, brown, and Indigenous people. Together we've been demanding what we deserve, not just what we think we can get. I'm running for mayor so BIPOC, and queer, trans and working class people have a mayor who's got your back, consistently.

Nezhad also wants more community members to be involved in creating the budget, a concept called participatory budgeting. She also plans to focus on investing in Minneapolis youth and hopes to start an LGBTQ community center for young people.

As mayor, I want to write a People's Budget with you and put $10M into participatory budgeting for community to decide. What would a people's budget look like for you?
Here's something I worked on last year: https://t.co/Px3YuSTVar pic.twitter.com/KZF8pWi1t4

“We’ve seen the closing of so many queer spaces here…As mayor, part of my work will be crafting rent stabilization policies that support small businesses to be able to open queer community spaces and support our youth. Because the youth are ready for change.”

Her bold vision for the city comes from her lived experience, she said. “I am a queer person and a mixed-race person…I’m a renter and a working-class person, and all of that has informed my understanding of what builds safety in Minneapolis, and I am not afraid to walk boldly into change.”

Russian could soon ban “LGBTQ ideology” for being an “extremist” movement

Pansexual people are real & valid. No matter how uncomfortable it makes you.