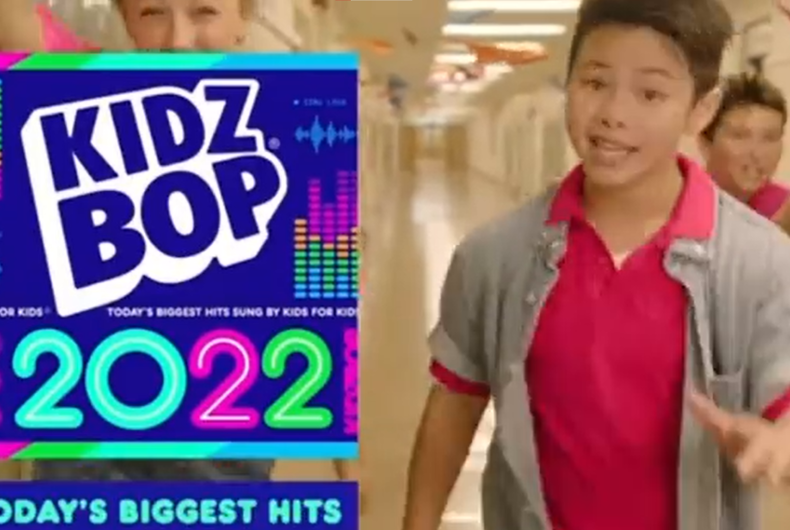 Kidz Bop is taking on one of the gayest songs of the year... and wearing pink shirts while doing it.Photo: Screenshot

Lil Nas X hit track “Montero (Call Me By Your Name)” is getting the Kidz Bop treatment.

“Montero” isn’t what most people would consider music made for children. Nas himself clapped back at online critics when the song was released earlier this year with: “i am not gonna spend my entire career trying to cater to your children. that is your job.”

Or maybe it’s the job of Kidz Bop, a music brand owned by Concord Music Group that produces kid-friendly versions of popular songs. Their collections of clean covers have been some of the best-selling children’s music albums over the last two decades.

And now they’re taking on “Montero.”

“lmaooo they are really making a kidz bop version of call me by your name,” Nas tweeted.

“not even joking i just saw this commercial,” he tweeted later, sharing an ad for the Kidz Bop version of the song, where the accompanying video showed young singers in a school wearing pink… instead of the more sexual and Satanic imagery of the original video.

“they killed it tho.”

not even joking i just saw this commercial 😭 they killed it tho https://t.co/B0d02I0JeQ pic.twitter.com/OcqotoLD94

The short clip doesn’t show how they cleaned up the lyrics for a younger audience. The original song lyrics discuss drug use and sex and use some words that people don’t think of when they think of Kidz Bop.

The Kidz Bop cover is due to be released on October 22 as a part of Kidz Bop 2022. The album will include covers of BTS’s “Butter” and Olivia Rodrigo’s “good 4 u.”

Activists chased Sen. Kyrsten Sinema into a bathroom. Biden brushed it off as “part of the process.”