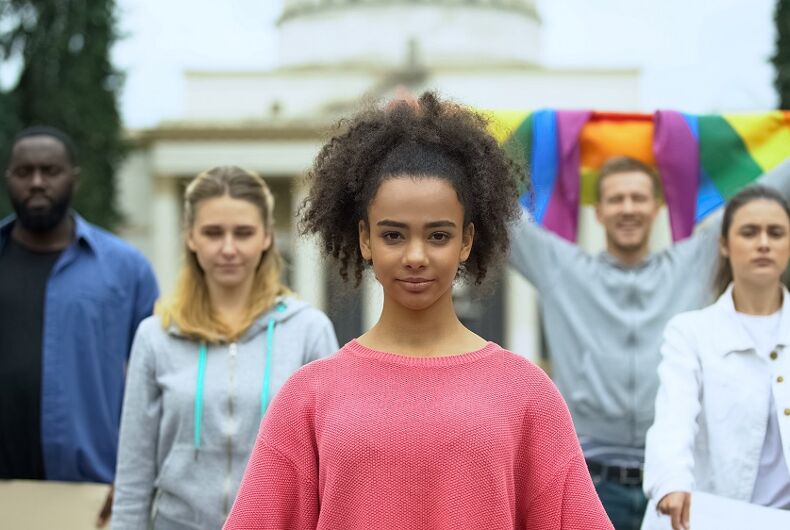 It seems a little quaint to say it these days, but I’m gay.

There was a time, one that we queers of a certain age remember well, when proclaiming one’s gayness was considered a bold and progressive thing to do. But that famous Time Magazine cover that featured Ellen DeGeneres next to the headline “Yep, I’m gay” appeared nearly a quarter-century ago, in 1997.

Now, with all the self-identifiers used with remarkable nuance and fluidity by younger members of the LGBTQIAP+ community, the word “gay” seems almost anachronistic, a relic from the past. (As an out gay college professor in my very late fifties, I am acutely aware of this.)

I’m immensely proud to be part of a community whose expressions of sexuality and gender are so expansive, fluid, and diverse that we need eight initials and a plus sign to contain them. Lesbian, gay, bisexual, transgender, queer, questioning, intersex, asexual, pansexual, and plus!

The initialism that contains our multitudes communicates to the world that we’re all in this together, resisters who refuse to be bound by traditional rules and definitions of manhood or womanhood or by binaries that have no basis in science and human experience. Proclaiming our solidarity is a major part of what National Coming Out Day should be all about.

At the same time, when I think about my own coming out, my old-fashioned gayness keeps calling to me, too. Maybe it’s because, for each of us under the LGBTQIAP+ umbrella, one of the most important things we can do is tell our own unique story. For me, that story is about being gay.

It’s about feeling for decades that I had to hide the crushes and sexual feelings inside me for fear that if I revealed even a hint of them, I’d get beat up or worse. It’s about the familiar slurs and the childhood bullies who still live within me, and the ways all the shame and silence of hiding who I was and what I felt strained my relationships with family and friends for years.

It’s also a story of political and social memory. It’s about the 23 years I spent not having the most important relationship in my life recognized by the federal government; the countless days of feeling diminished when mainstream politicians of both parties openly stated that people like us were second-class citizens; the terror of AIDS before any life-saving medications existed to treat it.

And it’s a story of my incredibly good fortune: the mending of family relationships on my own terms; the ineffable joy of my 30-year relationship; the wonder of being able to call the man formerly known as my partner my husband—and having other people call him that, too. That was something I never dreamed I’d experience in my lifetime.

I know that my story of liberation from the closet is an incomplete one, both for me and for my queer siblings around the country and the world. Queer kids in this ostensibly accepting country still live in fear of being found out. They still face bullying from peers, school boards, religious institutions, and sometimes even their families. They still go through 13 years of public schooling seeing no positive representations of people like them.

Many older queer adults still live with the outsized incidence of addiction and depression, the corrosive legacy of their homophobic and transphobic trauma. The criminalization of homosexuality still affects so many of our gay siblings around the world, often with deadly consequences. And in this country, many of our comrades in the trans community are at risk every day of violence and of having their rights stripped away by governors and state legislatures.

Seven years ago, I started writing a memoir about my own journey out of trauma, shame, and silence. Since the book came out in April, I’ve noticed a strange paradox about memoir: It’s often the most particular aspects of a story that resonate most strongly with readers.

Both strangers and people I’ve known for years—many of them not gay or even LGBTQIAP+—tell me about parts of the book that pinged something inside them, even if they didn’t experience exactly what I did. Then, unsolicited, they’ll share with me their own stories of feeling pressure from their families or society to be someone they’re not, or of silencing their voices to get along in the world, or of keeping up a false front just to get through the day.

And this is why we all need to share our individual, diverse stories, all the gay stories and all the other stories that make up the rainbow of the LGBTQIAP+ community.

Not everyone has the time or inclination to write a memoir. The year I started mine, I was unemployed and had a lot of time on my hands. You don’t need to write a book to make a difference.

If each of us tells a family member, a co-worker, or a friend our own unique queer story, we will have opened a window. Maybe someone will share their story, too, and we’ll all be that much closer to being a little more human with one another.

Michael Sadowski is the author of the 2021 memoir Men I’ve Never Been, recently named one of the 100 Best Gay and Lesbian Books of All Time by Book Authority. He is an associate dean and a professor at Bard College.