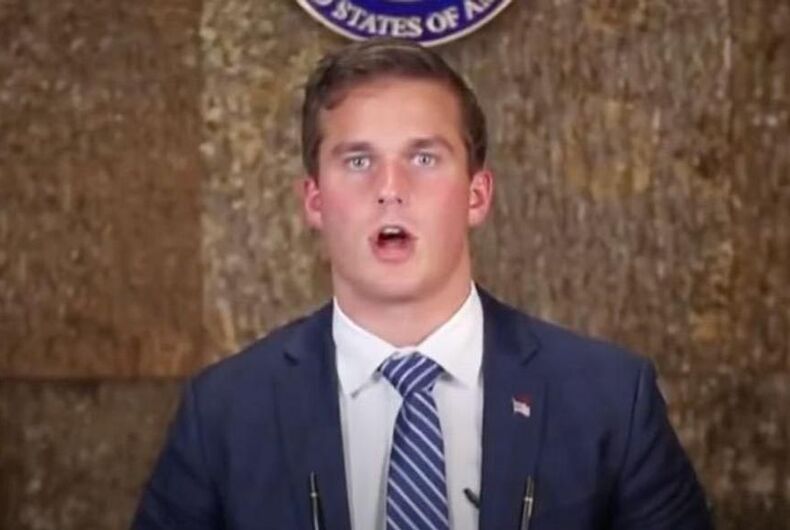 Republican wingnut Rep. Madison Cawthorn (NC) has complained that society is trying to “completely de-masculate” young men, citing declining testosterone levels. He urged mothers to raise their sons “to be a monster.”

“Our culture today is trying to completely de-masculate all of the young men in our culture,” Cawthorn said at a recent political event, Right Wing Watch reported. “You can look at the testosterone levels in young men today and they are lower than throughout all of history.”

“There’s a lot of reasons for this that we can get into later,” Cawthorn continued. “But my friends, they’re trying to de-masculate the young men in our country because they don’t want people who are going to stand up.”

“All you moms here – the ones who I said are the most vicious in our movement – if you are raising a young man, please raise them to be a monster,” he added.

Complaining that "our culture today is trying to completely demasculate all the young men," Rep. Madison Cawthorn issues a plea to parents: "If you are raising a young man, please raise them to be a monster." pic.twitter.com/v7b0pN3RA3

Cawthorn is correct that men’s testosterone levels are decreasing. Levels have dropped at least 20 percent in the last 20 years, and it’s particularly affecting the health of young men. Health experts have said increasing obesity, medication use and environmental toxins are most likely to blame.

But Cawthorn isn’t interested in addressing this actual issue. Moreso, he’s interested in presenting himself as the sort of “monster” that he’d like women to raise, especially as one willing to “stand up” against democracy.

A short, recent history of Cawthorn’s manly and monstrous lies

He has baselessly claimed that the 2020 election was stolen and said that Christians might resort to “bloodshed” if the non-existent problem isn’t fixed.

He helped instigate the January 6 MAGA insurrection at the Capitol. A few years ago he posed for a photo smiling at Hitler’s retreat in Germany and referring in the caption to the “Führer.” He has joked about the Holocaust to sell campaign merchandise.

Cawthorn was also exposed for lying about a car accident that left him paralyzed. He falsely claimed the accident derailed his plans to participate in the Paralympics — even though he was never an actual contender to compete — and to attend the Naval Academy, but the academy had already rejected his application before his accident.

He also recently posted an image of himself enjoying a nice cigar while his constituents drowned in floods. He has also said that it should be illegal for churches to urge their congregants to get vaccinated.

Cawthorn is also a transphobic opponent of LGBTQ rights. During a conservative talk show, he said that the LGBTQ movement “is saying that we need to be able to have gender reassignment surgery for 12-year-olds.” Such surgeries are incredibly rare but commonly used as a right-wing scare tactic used to shut down discussions of LGBTQ rights.

Jasmine Beach-Ferrara, a lesbian minister and mom of three, is running against Cawthorn in the next election. In one of her first campaign ads, she said that Cawthorn, like other young men, has been radicalized by extremists and fits the stereotype now for a would-be domestic terrorist.