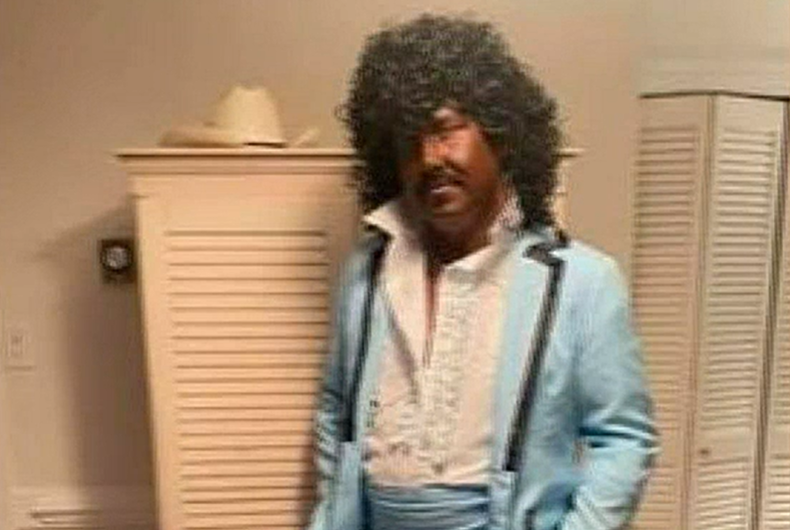 An city council member in Virginia who faced criticism for wearing blackface compared himself to Dave Chappelle, saying that, like the transphobic comedian, he doesn’t “go around walking on eggshells, worried about hurting someone’s feelings.”

Warsaw, Virginia Councilman Faron Hamblin posted a picture of himself in blackface to Facebook, which quickly led to outrage. Hamblin is white, and he wrote that he was dressed as “the legendary Randy Watson,” who is a fictional Black musician in the 1988 movie Coming to America.

Related: Anti-vaxx employee of school district that banned Pride flags shows up to work in blackface

“Give it up for my band Sexual Chocolate,” Hamblin wrote.

After posting the image, he received criticism on social media and later removed the post, writing a long defense of wearing blackface.

“Since I’m white it’s considered by some as offensive to dress as a black person,” he wrote. “It’s off limits if your [sic] a white person. I think that’s ridiculous! Especially when it was done to be a tribute to the character.”

Hamblin said that Eddie Murphy played a Jewish character in Coming to America and that he’s “sure some [Jewish people] were offended.”

“But Eddie showed his freedom of expression,” Hamblin wrote. “Like Eddie, or Dave Chappelle, I don’t go around walking on eggshells, worried about hurting someone’s feelings. But I never intended for this to be a racist issue.”

“I posted [the blackface picture] because I think everyone should have the freedom of expression.”

Chappelle has been embroiled in controversy this past month after the release of his Netflix comedy special The Closer, where he mocked transgender people, made jokes about their genitalia, and declared himself a TERF [trans exclusionary radical feminist] like J.K. Rowling. He also made jokes about beating up gay men and lesbians.

Much of Chappelle’s defense has been that he should be allowed to say what he wants on Netflix. He told a large crowd earlier this week that the controversy isn’t about LGBTQ people but instead about “corporate interests and what I can say and what I cannot say.”

Eddie Murphy faced controversy for anti-gay comments he made in his 1980s comedy show Delirious, where he ranted about “faggots,” made jokes about how he was afraid of being checked out by gay men, and said that straight women should be afraid to befriend gay men because they could get AIDS. He apologized years later for the jokes.

Hamblin wrote an apology to “those folks I offended today included [sic] my family.” He said that it “cuts pretty deep” to be called racist.

“I try to be a good person and help others regardless of who they are,” he wrote. “I’m here to say I love everyone on this planet, we should all feel the same.”

NBC 12’s Brent Solomon reports that the post drew “tons of comments mostly from people asking why he’s apologizing at all.”

All his Facebook posts have since been deleted. Hamblin has not commented on the controversy to the media.