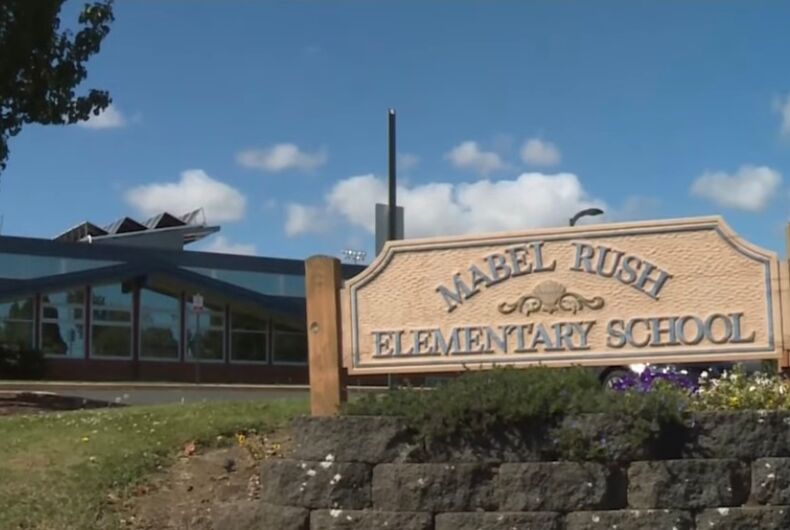 Lauren Pefferle, a special education assistant at Mabel Rush Elementary School, came to work on September 17 in blackface. Pefferle told her fellow co-workers that she wanted to emulate Rosa Parks, the Black civil rights activist known for initiating the Montgomery Bus Boycott, as a way of protesting the school district’s mandate for employees to be vaccinated against COVID-19.

The Newberg School District in Oregon, which voted to ban employees from having Pride and Black Lives Matter flags as well as any “political” items earlier this month, responding by claiming to “condemn all expressions of racism.”

Pefferle is on paid administrative leave.

According to anonymous staff members, Pefferle used iodine to darken her skin and try to make herself look like Parks.

Without naming her, the Newburg School District said that the employee was eventually removed from school grounds.

“Last Friday, one of our employees reported for work in blackface. The employee was removed from the location and (human resources) has placed the employee on administrative leave. The administration of Newberg Public Schools condemns all expressions of racism,” they said in a statement yesterday.

The school district noted that “It is important to remember how blackface has been used to misrepresent Black communities and do harm. We acknowledge the violence this represents and the trauma it evokes regardless of intention.”

“Each incident report is always taken seriously as we diligently follow our policies to investigate and take appropriate action. We continue to work towards a safe and welcoming environment in our schools that is free from bullying and reduces mental, emotional and physical harm as we move forward together in our mission of educating students,” they concluded.

BREAKING: A staff member at Mabel Rush elementary school in Newberg showed up to work in Blackface on Friday, allegedly saying she was dressed as Rosa Parks and protesting a vaccine mandate for teachers.

“This goes against everything I and the vast majority of NSD staff believe, and is unfathomably offensive,” superintendent Joe Morelock stated.

This is the latest in a series of racist incidents to take place in the school district. Last week, at least one student at Newberg High School was found to be in a group chat on Snapchat named “Slave Trade,” where white teens across the country joked about auctioning off Black students and exchanging racist, homophobic, and violent rhetoric.

The student shared pictures of Black students at school with other racist teens across the country for them to determine a “price” for them.

One member of the group wrote “All blacks should die. Let’s have another holocaust.”

Despite protests from Black students and others in the Newberg community, the student has not been named and no discipline has been taken by the school or the district. The school’s principal wrote a letter condemning racism and homophobia and pledging they will investigate.

In August, the board of the Newberg School District voted four to three to ban district staff and faculty from having Pride flags, Black Lives Matter flags, signs, clothing, and any other “political” items.

The board also created a three-member policy committee to define what messages and images might constitute a “political” speech, and then district lawyers will have to examine the ban to try to skirt around violating staff and faculty members’ First Amendment rights to free speech.

At the time, school board chair Dave Brown said, “It’s our job to make decisions that are going to be there for every single kid at Newberg High School, not just the kids that are represented in just one group. It has to be all kids.” The ban’s supporters claimed it targeted “divisive” symbols.

Oregon Public Broadcasting (OPB) noted that the district’s ban went against statewide efforts by the Oregon Department of Education (ODE) to implement a “success plan” to show support for Black Lives Matter (BLM) and LGBTQ students. It also went against the recommendation of almost a dozen school counselors.

Now Brown has yet to comment or respond to inquiries, according to KOIN, and Mabel Rush Elementary has made their social media pages private or limited comments. But parents and local activists are speaking out.

Tai Harden-Moore, a Black woman and parent in the community who ran for the Newberg School Board, said that the employee’s choice to wear blackface “makes sense only because we have our county commissioner, Mary Starrett, who drew that line between vaccine mandates and Jim Crow. That was only a couple months ago.

“Our county leadership is saying basic public health measures are akin to Jim Crow. There is a line between our political leadership and something like this happening. Our leadership matters,” Harden-Moore said.

The activist group working to recall Newberg school board vice chair Brian Shannon — who has championed a policy that would ban Black Lives Matter displays and all other “political” symbols in local schools — made a statement on the Blackface incident at Mabel Rush elementary: pic.twitter.com/9maj8VtEVy