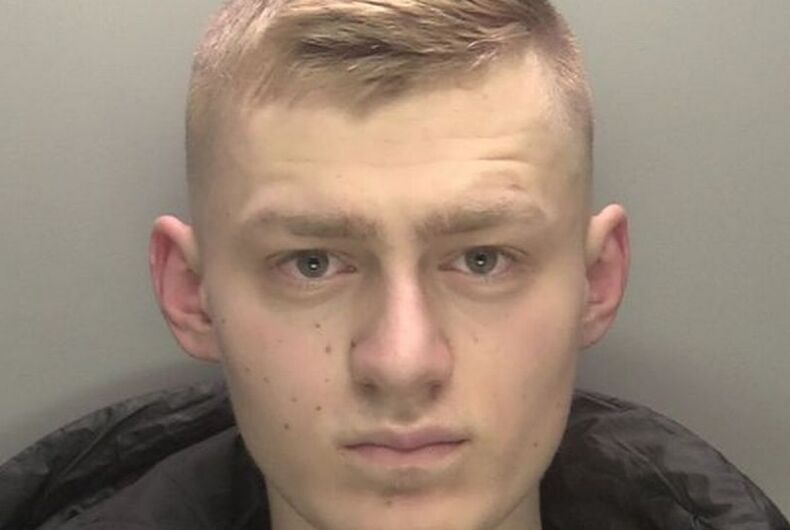 A group of homophobes tortured an unnamed 17-year-old in Kings Heath — a suburb of south Birmingham, England — over his homosexuality.

Related: A 12-year-old boy was tortured for being gay on Instagram Live. His mom filmed & broadcasted it

The attack occurred in the apartment of 20-year-old Taylor Knight, the victim’s ex-boyfriend. Knight allegedly “abducted” a 15-year-old girl and then got her, another teen girl and a male friend known as “Ace” to help torture his victim.

At least one attacker recorded footage of the crime on their cell phone, Birmingham Live reported. The video recording and police body camera footage were used to convict Knight and prosecute the 15-year-old girl.

The attack reportedly began when Ace began verbally abusing the gay teen. Knight then threw water and a sandwich in the victim’s face, leading the victim to text his location to his brother and request help, Yahoo! News reported.

The cell phone footage showed the attackers punching and kicking the 17-year-old on the floor as they repeatedly called him a “pussy.” The attackers then forced the victim to strip naked. They dragged him around the apartment and used aerosol and a lighter to burn his hair. Knight also threatened to “rape and burn him,” the aforementioned publication said.

“The defendant proceeded to take a wire, place it around the victim’s neck and strangle him with it. He then put him in a headlock while ‘Ace’ kicked him in the face,” Prosecutor Omar Majid told the court. “They dragged him into the bathroom and made him sit in the bath in cold water and threw cigarette ends at him.”

The group also stole the victim’s mobile phone and money. Knight and “Ace” then left to purchase drugs with the victim’s money. While they were gone, the 15-year-old girl poured boiling water on the victim — something capable to inflicting third-degree burns requiring painful, reconstructive surgery. Upon returning, Knight threatened to kidnap and stab the victim.

Unbeknownst to his attackers, the victim’s brother had alerted police who arrived at Knight’s apartment. Knight then claimed not to know the victim. He said the victim had been attacked by others before Knight discovered his battered body on the street.

Police said they found the victim terrified and cowering in the bathtub. The victim was “broken” by the attack and now suffers from post-traumatic stress disorder (PTSD), police said. Nevertheless, the victim still identified his attackers.

In court, Knight pleaded guilty to assault occasioning actual bodily harm, theft and child abduction. A judge said Knight committed a hate crime and then sentenced him to three years and eight months in prison.

Judge Heidi Kubik told Knight, “The fact you chose to join in because of your own repressed sexuality or feelings does not prevent this being an offense within the meaning of the act.”

The 15-year-old girl was convicted of assault occasioning actual bodily harm and theft. The court gave her a youth rehabilitation order which can include counseling, community service and other obligations.

The second girl faced no charges. It’s unclear whether “Ace” did.

Small town mayor stripped, tied to a tree & beaten by thugs at a gay cruising area