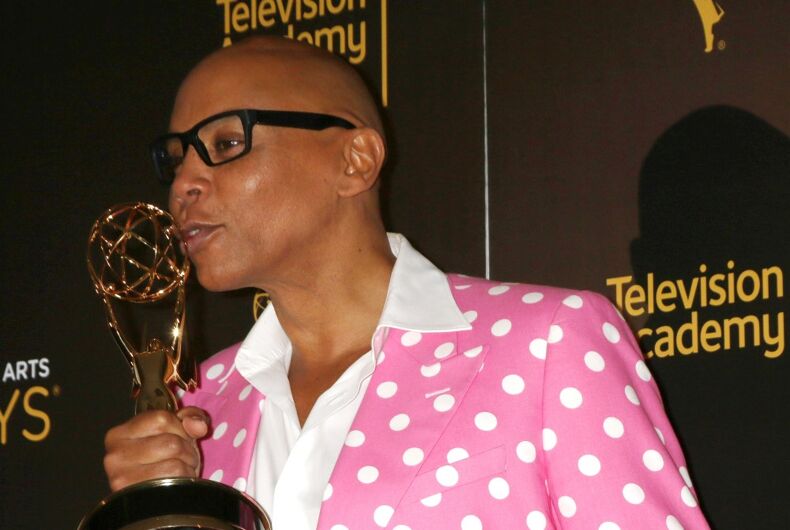 Related: Lil Nas X thanks “the gay agenda” as he takes top trophy at the VMAs

During his acceptance speech for the Emmy for Outstanding Competition Program, RuPaul took the stage with judge Michelle Visage, season 13 winner Symone, and season 13 contestant Gottmik, and he spoke directly to queer youth.

“For you kids out there watching,” RuPaul said, “you have a tribe that is waiting for you.”

“We are waiting for you, baby. Come on to Mama Ru!”

RuPaul is now the most-decorated Black artist since the #Emmys began in 1949.

🚨Historic moment🚨 @rupaul is the most-decorated Black artist at the #Emmys – EVER! Congrats to @RuPaulsDragRace on your win for Outstanding Competition Program! pic.twitter.com/BOVhZj1u7C

Out actor Jonathan Groff was part of the team from Hamilton on Disney+ that won the Emmy for Best Variety Special. He was also nominated for Outstanding Supporting Actor in a Limited or Anthology Series or Movie for his portrayal of King George in Hamilton but did not win the prize.

Porter and Rodriguez presented an award together.

Carl Clemons-Hopkins is the first out non-binary actor to be nominated for an Emmy, ever. They were nominated for Outstanding Supporting Actor in a Comedy Series for their work on Hacks but did not take home the prize.

They still left an impression on the red carpet, sporting purple, black, white, and yellow, the colors of the non-binary pride flag.

Can we please talk about Carl Clemons-Hopkins from #Hacks in this perfect look on the #Emmys red carpet?!? pic.twitter.com/nlWh7x1MEc

The Emmy Awards faced criticism for how so many of the winners were white, despite how people of color made up 44% of the nominees chosen by the Academy of Television Arts & Sciences. White people won all the 12 main lead and supporting actor awards.