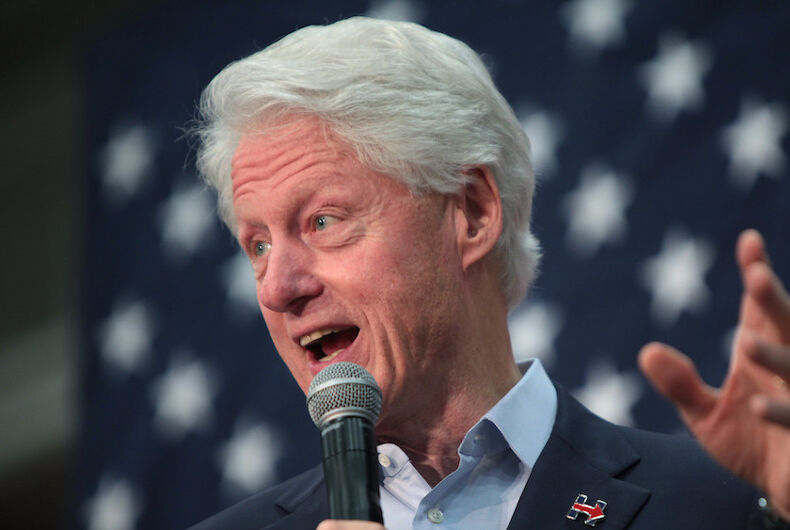 One of the low points in LGBTQ history was the passage of the Defense of Marriage Act (DOMA), and, more specifically, then-President Clinton’s willingness to sign it into law.

Clinton came to office pledging a new day for LGBTQ rights, and instead he gave the community the bill that would block marriage equality for 17 years until it was finally struck down by the Supreme Court.

Just how Clinton ended up enshrining discrimination in federal law is one of the subjects tackled by political reporter Sasha Issenberg in The Engagement: America’s Quarter-Century Struggle Over Same-Sex Marriage. Based on an excerpt published in Politico, it’s hard not to lay a lot of the blame for the debacle directly at Clinton’s feet.

DOMA was originally a brainchild of culture-war Republicans who wanted to capitalize on the nascent move toward marriage equality in Hawaii. At the time, only two Senate Democrats — Ted Kennedy and Ron Wyden — were on record for favoring same-sex marriage.

DOMA banned the federal government from recognizing same-sex marriages should states legalize them or providing benefits like health care to federal employees or Social Security to surviving spouses. It also ensured that federal regulations only defined opposite-sex couples as married.

For four months, the Clinton White House grappled with how to respond to the bill. “Those four months would be marked by perpetual scheming, contentious argument and, for the few openly gay staffers working there, wrenching despair,” Issenberg writes.

The White House viewed the bill as a political trap, forcing Clinton to abandon LGBTQ voters in the middle of his re-election campaign. Already, the relationship between Clinton and the LGBTQ community was on shaky ground because of the way the president’s mishandling of his pledge to allow gays in the military instead resulted in “Don’t Ask, Don’t Tell.”

Marsha Scott, the White House liaison to LGBTQ groups, argued that the bill should be vetoed on the grounds that it overrode state rights. “It can be said that as a former governor, the President has great respect for the right of individual states to define their issues and this issue falls clearly within their prerogative,” Scott wrote to Clinton’s senior advisor George Stephanopoulos.

But Issenberg notes that within the administration, “the choice was never between signing or vetoing the bill.” Instead, it was about evading it as much as possible.

Perhaps the most influential voice was pollster Dick Morris. “Now the Republicans have a bill we can sign,” Morris told Clinton. “But if we wait to back it, they’ll probably tack all sorts of anti-gay amendments onto it that you’ll find difficult to sign.”

Morris has since become a political punchline for being consistently wrong about everything. Even Fox News dumped him, which is quite something for a network that has never cared about accuracy.

At the time, though, Morris held an almost Svengali-like sway over Clinton. All Clinton cared about was his own re-election. For him, everything was viewed as political.

The bill sailed through the Senate on a 85-14 vote, which meant Clinton finally had to make a decision after being deliberately vague for months. What he did was quintessential Clinton. He signed the bill without any reporters present at 12:50 am, after returning to the White House from a west coast trip.

The White House argued that the timing was a message hinting at disdain. Issenberg is more accurate: “To many on both sides of the issue, it was an example of Clinton — who would in a 2013 op-ed describe the law as ‘discriminatory’ and at odds with the American values of ‘freedom, equality and justice,’ while still justifying his decision to enact it — wanting to have it both ways.”

To add insult to injury, the Clinton campaign then ran ads on Christian radio stations trumpeting Clinton’s signing of the bill.

“The origins of the ad—specifically whether its release was a careless mistake or an approved tactic—remained opaque, even to those within Clinton’s orbit who set out to identify a responsible party,” Issenberg writes.

What is clear was that it was entirely in character with Clinton’s political calculus. The man who promised a new day for LGBTQ rights saddled us with the two most destructive policies in modern times.

Eventually they were undone, but not before wreaking untold damage. For Clinton, it must have been worth it. He was re-elected, and that’s all that mattered.

Principles never came into it.