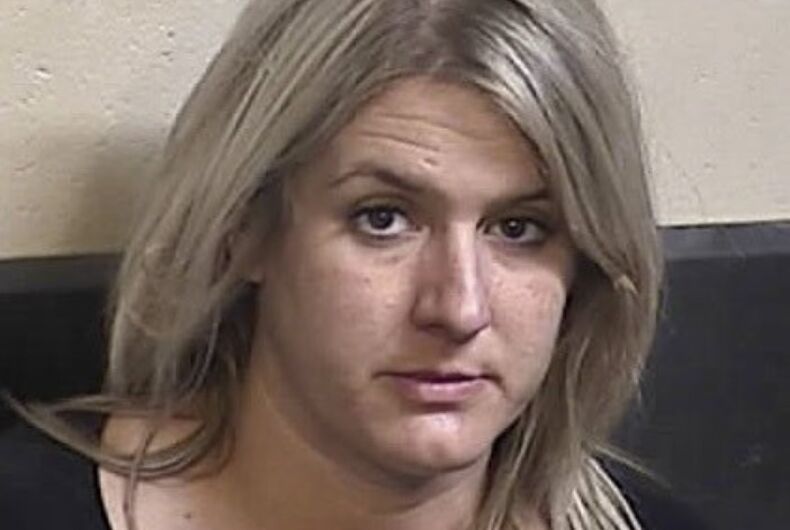 Anti-transgender activists on Twitter are now saying that a woman who committed a sex crime is transgender because, they argue, the alleged molester’s mugshot doesn’t look like a cis woman.

Krystal Jackson, 39, is a teacher in the Kings Canyon Unified School District in California who was arrested this past Friday, accused of sexually assaulting a 14-year-old boy three times. She is facing four counts of rape, as well as several other charges connected to the alleged sexual abuse of the minor.

Local reporting has not said that Jackson is transgender or given anyone any reason to believe that she is. And a woman who claims to have grown up in the same town as Jackson said that she is “a cis hetero woman.”

But that’s not stopping anti-transgender activists from insisting that Jackson is transgender. The activists are commonly referred to as TERFs – transgender exclusionary radical feminists. They do not share the same ideology as most of the rest of the feminist movement and work with the religious right to oppose transgender civil rights.

“Does this mean HE gets to be placed in women’s prison??” wrote a Twitter user who goes by “Mel,” referring to Jackson with “he” and apparently arguing under the assumption that Jackson is transgender and should not be housed in a women’s prison. “Yeah, but Self ID is SUCH a grand idea.”

For all their talk about protecting women, TERFs are fast to pass judgement on any woman who doesn’t fit into their narrow stereotype of what a woman should look like.
Also worth noting that this is the same crowd who insists women are incapable of committing sexual assault. https://t.co/rgzkcYPWYq

A woman who said that she grew up in the same town as Jackson, Jennifer Rossotti, tweeted that Jackson is cisgender, but Mel doubled down.

“My tweets bring all the misogynists to the surface,” Mel claimed. Her tweets have since been made private. “FFS, this is a biological man who raped a child!!! So bloody sick of the crap.”

And she doubles down… pic.twitter.com/cTV83paeYg

Mel wasn’t the only one. Another Twitter user, Donna Wallace, said that rapists always have penises. That is not true under California law, which defines rape as an act of sexual intercourse without consent.

Am I missing something here? How can a female be charged with four counts of rape? Don't you need a penis to commit rape? 🤔
Who Is Krystal Jackson? Teacher Accused Of Sex With Student https://t.co/uEwEH2wGRN via @owillis

“Does it hurt a bit, passing this off as a female sex crime?” user Tania wrote in response to an ABC journalist’s tweet on the arrest.

Does it hurt a bit, passing this off as a female sex crime?

Another user with the handle @sickofgenderwoo and whose name includes support for noted anti-transgender author J.K. Rowling – both common signs of transphobia on the platform – wrote that “it’s obvious” that Jackson is transgender, although they didn’t say why.

Guess what! No, I’m not going to say, but it’s obvious🤦‍♀️

One person claimed that looking closely at Jackson’s mugshot reveals a scar from a tracheal shave, a procedure some trans women undergo to reduce the prominence of an Adam’s apple. To others it just looked like a shadow from a wrinkle.

wtf are you talking about? That’s literally just a wrinkle/skin fold. Plenty of women have creases on their necks.

Others have been responded by pointing out that using looks or gender stereotypes to assess whether someone is a cis or trans woman is misogynist in itself and that using trans identity as an attack on an alleged sex offender is transphobic.

TERFs:
We can always tell

I thought GCs believed women don't have to perform femininity & that the anti-aging cosmetic industry is predatory. Yet here they are, eager to claim this person is trans because she looked androgynous and older than her age in a mug shot.

The amount of people automatically assuming she’s trans is depressing

The people who are claiming she's transgender are also really jumping into the "women can't rape" section which is next to the same people who think a kid banging his teacher is actually cool.

Does it hurt a bit, when you realize that you're wrong and once again you reactionaries are trying to blame the trans community when in fact it was a cis woman like yourself who committed the crime?

The only evidence that transphobes have that alledged rapist Krystal Jackson is a man is that she doesn't look attractive enough to be a "real woman", & wow does that speak volumes about their misogyny.

Literally an ordinary looking woman with no makeup on.
It's like they're so obsessed with making trans people villains that they've straight up forgotten that women all look different, and aren't born covered in concealer.
So much for always being able to tell…

Lauren Boebert may lose her seat in Congress