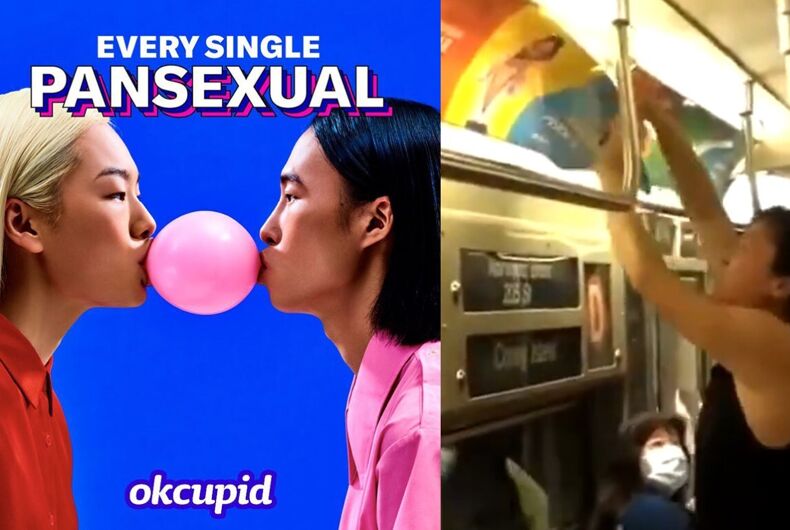 A deranged anti-vaxxer went on a rampage in a NY subway car over ads for OKCupid.Photo: Screenshot

A woman has gone viral in rightwing media after she was recorded tearing down LGBTQ-friendly ads in the New York City subway.

“It’s gross,” the unidentified woman said in the video, tearing down the ads. “You want kids to be looking at this? Is that okay? This is propaganda.”

The ads are a part of the dating site OkCupid’s “For Every Single Person” campaign, which shows a variety of different types of people – insomniacs, introverts, feminists – finding love.

Several of the signs are about LGBTQ identities, including pansexuals and non-binary people. Other ads give viewers permission not to date someone if they don’t like them, mentioning conservatives and people who oppose abortion rights, perhaps because the ads are targeting young singles in New York City.

An alt-right anti-vaxxer posted the video to Twitter, where it has gotten over a million views and has been picked up by several far-right media outlets.

“The government is against us!” the woman shouted as she tears down an OkCupid ad about feminists. “We the people say we don’t want this anymore!”

Another man joined her in taking down the signs and a few people called her out, but otherwise, the vast majority of people on the subway aggressively ignored her.

“The government is pushing you to eat shitty food so you stay fat,” she continued. “You stay fat and unhealthy.”

The conservative site PJ Media did an article on the video and said, “It’s nice to see adults in NYC take matters into their own hands.”

The article said the ads are “sexually suggestive” and use “words that would lead a child down a very dark internet search,” calling it “disturbing” that OkCupid says some people would not want to date conservatives.

OkCupid has said the ad is supposed to promote inclusion.

“We want this campaign to show everyone — from feminists to introverts to non-binary to pansexuals to vaxxers — that OkCupid is a place where they can feel welcomed,” said OkCupid global chief marketing officer Melissa Hobley. “We have always been an exclusively inclusive dating app, and that will never change.”