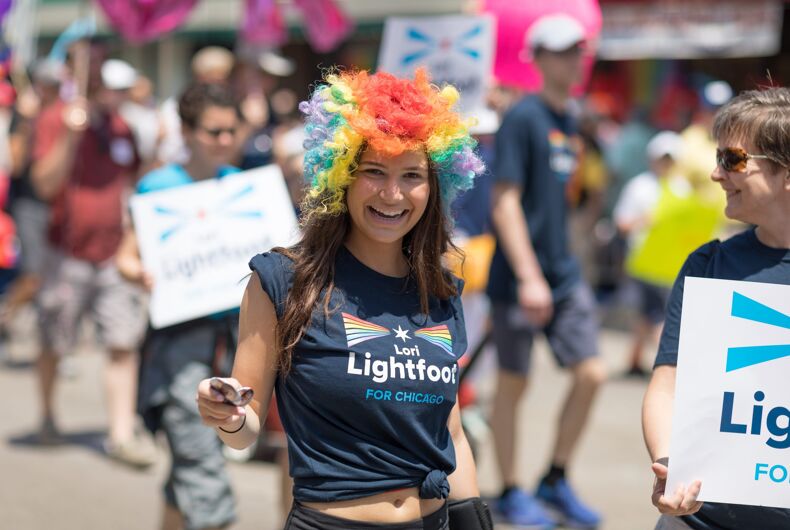 June 24, 2018: A young woman marches in support Lori Lightfoot's campaign for mayor of Chicago during the LGBTQ Pride Parade.Photo: Shutterstock

Chicago’s iconic Pride parade has been canceled for the second year in a row over coronavirus concerns, with organizers saying in a statement that they were “naive” to believe that most people would be vaccinated in time for the parade.

Normally held in June, the parade had already been pushed back to October but the surge in infections from the Delta variant sweeping the nation forced organizers to pull the plug.

Related: Chicago alderman says he “identifies as a vaccinated person”

Organizers say they hope to return to some semblance of normal in 2022 and plan to hold the parade on June 26.

“We’re going to believe that in June 2022 we are living in a far safer world than now. We intend to have the best, most joyous, fabulous, memorable Pride Parade ever,” Pride Chicago’s Tim Frye said.

Normally held the last Sunday in June, the 2019 parade was cut short due to inclement weather. The day-long event is historically the second-largest parade in the city and the largest in the Midwest.

If more Americans had gotten the vaccine, the event might not have been canceled, but the faster-spreading variant has torn through the unvaccinated, filling hospitals with dying patients that one nurse described as “begging for the vaccine” when it’s too late. Even vaccinated individuals can still catch the variant; they rarely get seriously ill but can still spread the virus.

“With the advent of three effective vaccines, we felt that the late date would allow for most people to be vaccinated and, thus, make it much safer to have a parade. Sadly, we were very naive in that belief,” organizers said in a prepared statement. “Everyone knows the reasons we were wrong in our estimate as to how safe things would be in the fall. Leave it at that.”

“To use the words of a song from the ’60s: ‘You Can’t Always Get What You Want,'” Frye continued. “We really wanted and hoped that there could be a parade in 2021. We don’t feel, though, that we can do it safely for everyone in the parade and the people watching. We must cancel the parade for the second year.”