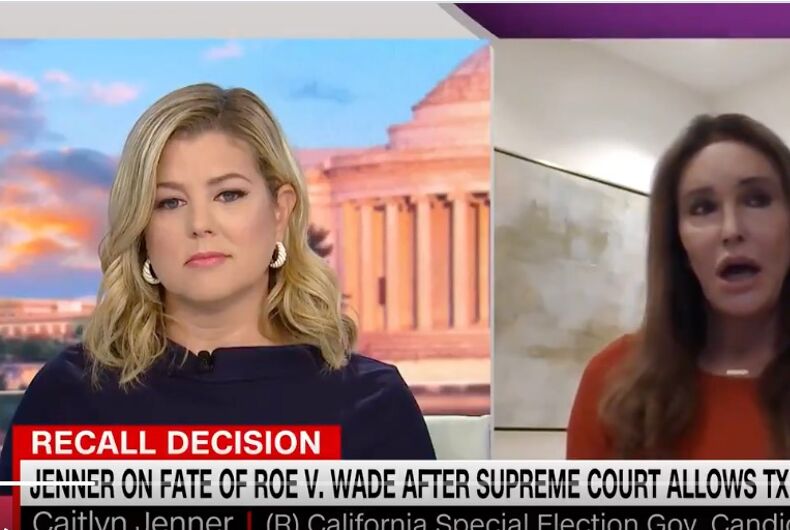 Out transgender celebrity and first-time political candidate Caitlyn Jenner has found herself in hot water after a catastrophic CNN interview exposed just how unprepared she is to become the governor of California.

Jenner, who is running in the recall election against California Gov. Gavin Newsom (D), expressed tepid support for Texas’ atrocious new law that bans abortions after a fetal heartbeat is detected – before most women even know they are pregnant.

Jenner clarified that “I am for women’s right to choose” but qualified that by saying she’s “fine with it” since Texas has the right to make their own laws.

“I am also for a state having the ability to make their own laws, and so I support Texas in that decision.”

Jenner also tried to defend her previous support for Florida Gov. Ron DeSantis’ (R) handling of the coronavirus pandemic while offering up a lackluster defense of his disastrous performance. After bumbling through her answer, she concluded with the deep insight, “To be honest with you I’ve been so into California politics that I really haven’t followed it that closely.”

Unable to stop herself, Jenner continued her mouthy meltdown by castigating “illegal” immigrants. While some immigrants are undocumented, people cannot be illegal.

Jenner recounted her campaign publicity stunt at the border, telling host Brianna Keilar that she saw four “illegals” from Brazil walk up to the border and turn themselves into authorities as refugees. This is how the system is supposed to work and it is not illegal for refugees to present themselves at the border.

Jenner is currently polling at an abysmal one percent in the race. Other candidates who poll that low are not normally interviewed as if they are serious candidates.

Caitlyn Jenner, a candidate in the California governor recall election, on Texas’ six-week abortion ban: “I am for women's right to choose. I am also for a state having the ability to make their own laws, and so I support Texas in that decision.” https://t.co/NZMDw5Ruhj pic.twitter.com/cjY1beOWDa

If any other candidate was polling at 1%, they wouldn't be getting airtime. There is absolutely no reason why Caitlyn Jenner should be on any news network.

Caitlyn Jenner has benefited so much from evolving social attitudes and respect & acceptance of who she is in society as a whole. Yet there she is spreading messages of hate & intolerance. Calling immigrants “illegals.” There are countries where she would be considered “illegal.”