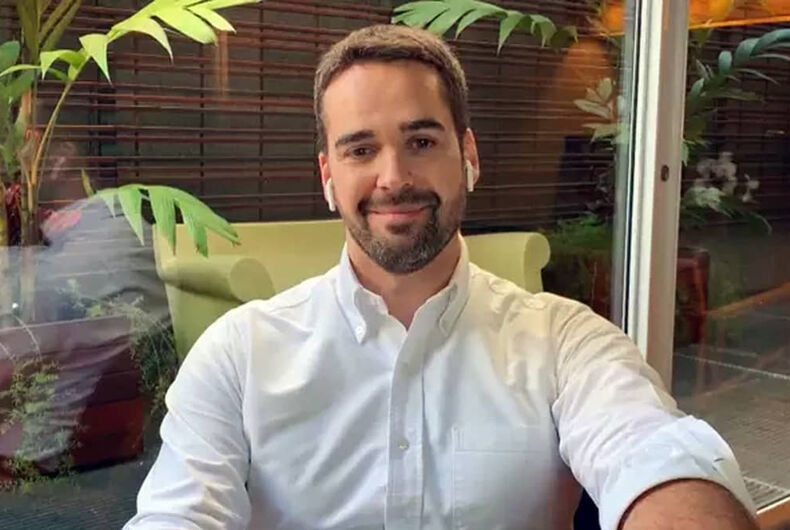 Eduardo Leite, the governor of Rio Grande do Sul is considered a top contender to Brazilian president Jair Bolsonaro in the next election, despite coming out as a gay man earlier this summer.

Leite offers a notable contrast to Bolsonaro, an anti-LGBTQ zealot known for becoming a global aspirational figure for the far-right. Yet, he recently made clear that he does not consider LGBTQ equality a cause important to him.

Related: Country club president hired a hitman to kill his ex-wife after she came out as a lesbian & left him

Leite, a member of the Brazilian Social Democracy Party (BSDP), is trying to position himself as a centrist alternative to Bolsonaro’s ultra-conservative agenda and previous president, Luiz Inacio Lula da Silva, considered the leader of the left.

Long before his decision to run for Brazil’s top office, Leite told Bloomberg, he was motivated to come out “before being accused of making a political calculation.” He even asked his partner to come out to his family ahead of his own public coming out, “so that people would fully know who they were supporting, and not get surprised out of nowhere along the way.”

“In Brazil nowadays, unfortunately, this [homosexuality] is one theme to discredit people, especially because of the way that Bolsonaro talks about it,” he said.

Still, Leite is not trying to make LGBTQ rights his top policy priority on the campaign trail.

He believes “the correct direction for the country is toward respect, tolerance, and the quest for equality,” but fighting for LGBTQ equality is “not a cause I lay down for.”

Leite noted that “Brazil should be prepared” to elect a politician who is out, based on polling supporting that argument.

Leite added, “Not every woman is a feminist activist, not every black person is a racial activist, and not every gay person needs to be an [LGBTQ] activist.”

“Independent of ideological questions and all the attacks that he will suffer, we’re in the trenches to defend him,” said Toni Reis, the director-president of the National Alliance of LGBTI+. The group along with the Brazilian #VoteLGBT group have shown their support for Leite.

Leite came out during his country’s Pride week in an interview with the talk show Conversa com Bial. He is his country’s first out gay governor, though he didn’t hide his identity.

In June, Bolsnaro said that Leite hid federal resources in his backside. The remark made Leite file a criminal complaint against the president.

Some LGBTQ Brazilians hailed Leite’s coming out, and his past support of same-sex marriage, as an antidote to Bolsonaro’s Trumpian politics and queerphobia. However, others have pointed out that Leite is also a member of the center-right Brazilian Social Democratic Party. Leite also endorsed Bolsonaro during the president’s 2018 campaign and has yet to withdraw that endorsement.

In 2013, Bolsonaro proclaimed, “Yes, I am homophobic — and very proud of it.” He has said that he’d rather his son die in an accident than be gay. He has advocated that parents should beat being gay out of their children.

In 2017, he said that he’d never have a gay son because his family has “a good education.”  He also promised to ban schools from mentioning LGBTQ people because it’s a threat to the country’s Christian values.  Bolsonaro reportedly told people that “wearing masks is a f**got thing,” just days before getting COVID-19 in 2020.

Bolsonaro was held in high regard by former President Donald Trump, but in 2019 he canceled a trip to New York City due to widespread resistance and venues refusing to host an event honoring him. A petition against Bolsonaro called him a “well-documented bigot.”

New York City mayor Bill de Blasio (D) thanked venues for rejecting the “dangerous man” due to his “overt racism, homophobia and destructive decisions.” Bolsonaro derided the backlash as the result of “activist ideology.”

Brazil’s presidential election will occur in 2022.