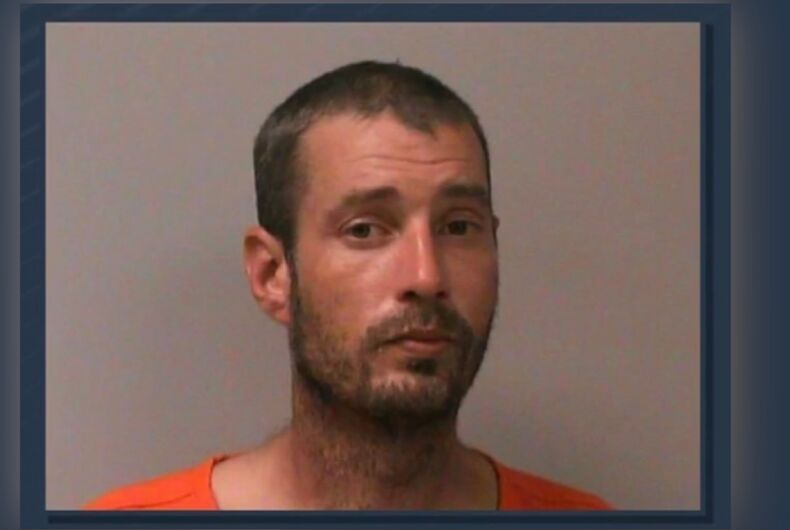 A man is being charged with approaching two transgender teens, yelling slurs at them, and brutally assaulting them after accusing them of having sex in public.

Travis Crawford is being charged with felony counts of battery and jumping bail. After facing pressure from the community and one victim’s parents, prosecutors have also charged him with a hate crime, despite initially declining to add that charge.

The incident happened the evening of July 20 in La Crosse, Wisconsin. Crawford saw two teens and approached them in a wooded area of Copeland Park. One of the teens, Jax Gross, later shared his side of what happened.

Gross, who is a 17-year-old trans boy, was relaxing with his girlfriend when Crawford began yelling at them, accusing them of having sex.

“We just ignored him and then he ended up coming over, and talking to us, and fighting with us,” Gross said.

According to the criminal complaint obtained by Wisconsin Public Radio, Crawford told the teens that it “looked like they were fucking and stuff,” although the teens denied it and told him repeatedly they were “tickling” each other. Crawford wasn’t satisfied with the answer the teens gave him, and then claimed that the couple was responsible for stealing his bicycle.

“And then he was calling us ‘faggots’ and all that stuff, and telling us to get out,” Gross recalled.

Gross asked Crawford to go away repeatedly, at which point Crawford allegedly told the teens he “had steal toed boots” and asked Gross if he would “like to feel them.” Crawford then punched Gross in the face with a closed fist and kicked him with the end of his boots once he fell to the ground.

Crawford allegedly left Gross bleeding in the arms of his girlfriend, who insisted on reporting the incident to the police. Crawford had left by the time police arrived but the 40-year-old was apprehended later, when he admitted making contact with the two teens, who he described as “queer.”

Gross was left with a bleeding nose, lacerations to his face and a chipped tooth. He was treated and released from an area hospital.

Gross told News 8 Now, “Me and my girlfriend only have so much time to spend together, and he had to just ruin it for us.”

Crawford was arrested and charged on July 21, although he was subsequently released on his own recognizance and is now out on bail. Despite being “concerned about the random violence in this case,” and allegedly committing the crime while out on bail, county judge Todd Bjerke granted Crawford bail on up to a $2,500 cash bond.

Initially, La Crosse County prosecutors said they could not charge Crawford with a hate crime, even though they believed the crime was motivated by hate. They said the Wisconsin hate crimes law did not include gender as a protected identity.

Gross’s mother, Julia Barton, was disappointed to hear that.

“I feel this man came at my son knowing he was a boy thinking they were in a gay relationship and that’s why it should be labeled under a hate crime,” she said.

“It is, of course, appalling that some members of our community are so consumed by hate that they are provoked to violence against children,” Reynolds said in a statement after the incident.

“But we should extend our indignation of this attack to our state lawmakers who choose inaction on outdated state laws over justice. To those lawmakers, I urge immediate action.”

On August 5, prosecutors did decide to charge Crawford with a hate crime modifier to his one count of substantial battery with intent for bodily harm. Crawford was also already facing another unrelated felony charge, which resulted in the bail jumping charges for failing to adhere to those bail agreements.

Kathy Flores of the Wisconsin LGBTQ advocacy group Diverse & Resilient told WPR, “It is really difficult to get prosecutors to put the hate crime enhancer in general on hate violence because there’s some hesitation around that. Even when there is clear-cut evidence that a hate act is the result of somebody’s perception of what that person is.”

While outraged that Crawford is out and about, Barton is glad her son is still alive.

“I am a lucky parent to sit here today and talk to you about him being alive instead of being dead because getting kicked in the head with a steel-toed boot is really dangerous,” she said.

Crawford has declined to comment on the case on-camera other than to threaten reporters with lawsuits for “slander.” Between both charges, he faces a maximum of ten years in prison, and a minimum punishment of fines if he is convicted.

He returns to court for a hearing on August 12.