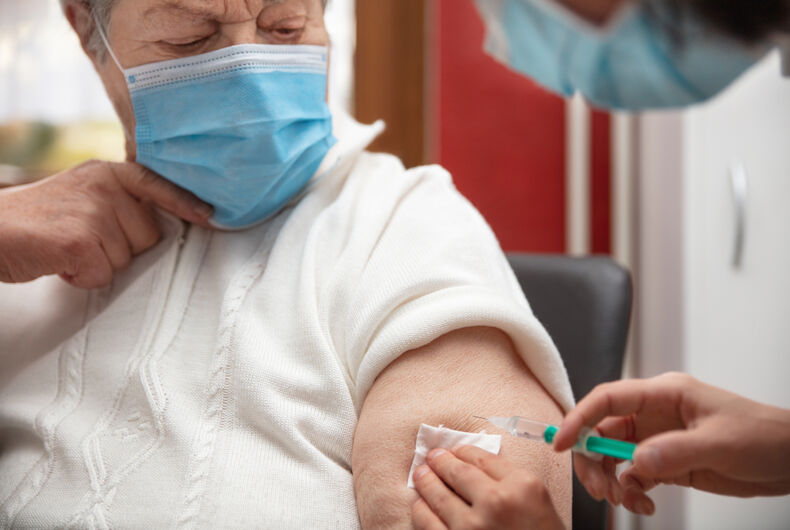 A study commissioned by the Human Rights Campaign Foundation (HRCF) has found that approximately 92 percent of LGBTQ adults has been vaccinated against COVID-19 or received at least one dose of a currently available vaccine. That equates to nine out of every ten LGBTQ adults.

In comparison to non-LGBTQ communities, the LGBTQ community is seeing much higher vaccination rates. The CDC determined that 70 percent of the general adult population in the United States had gotten at least one dose of the vaccine on August 2. This new study reflects responses made by LGBTQ adults made between May and June.

The groundbreaking collection of data was determined from responses to the Community Marketing & Insight’s (CMI) 15th annual LGBTQ Community Survey. More than 15,000 responses were recorded from LGBTQ adults.

the gays got the jab pic.twitter.com/0gb8bNmtWX

CMI’s Senior Director of Research, David Paisley, attested the findings to the effects the pandemic, and other social issues, have had on LGBTQ people.

“There are many reasons why LGBTQ+ vaccination rates may be higher than the general population, including higher percentages of the LGBTQ+ community being liberal, living in blue states, and living in urban areas,” Paisley said.

“While participants had strong education levels, those with no more than a high school diploma still had an 87 percent vaccination rate. We also see that COVID isolation significantly impacted LGBTQ+ people, which may have motivated quick vaccination to reenter the community.”

maybe we can’t drive or sit correctly but we WILL do the bare minimum to take care of each other pic.twitter.com/k2KfZfkhpo

One other key factor may be that many LGBTQ people have seen those close to them affected by the spread of COVID-19. 36 percent of LGBTQ adults — close to four of every ten — have had a close friend or family member personally become sick from COVID-19.

Further, 21 percent of LGBTQ adults — or two of every ten — have lost a friend or family member to COVID-19.

Another factor is that a majority of the LGBTQ respondents reported that they “feel Pride” in being a part of the community and that they “regularly read or view the LGBTQ media.” A majority also “strongly agreed” or “somewhat agreed” that they can be themselves at work or school and that they have support in the LGBTQ community, compared to the number of participants who “disagreed” with that assessment for themselves.

“We are encouraged to see evidence that suggests such a strong majority of the LGBTQ+ community who responded to the survey have received at least one dose of a COVID-19 vaccine. The science is clear: vaccines are our way forward and out of this pandemic,” Jay Brown, the HRCF senior vice president of program, research, and training, said in a statement. “The Human Rights Campaign Foundation will continue working with our partners to ensure that no one in our community is left behind.”

According to data collected by @LGBTQinsights and funded by @RockefellerFdn, the LGBTQ+ community appears to lead the way in COVID-19 vaccination rates, with 92% of LGBTQ+ adults in the study having received at least one dose of the vaccine. https://t.co/xkSEGke8Tq

NEW from @HRC & partner orgs: a strong majority (92%!) of LGBTQ+ adults in the United States have received at least 1 dose of COVID-19 vaccine. pic.twitter.com/mqvf3lBfvq

The full CMI community survey can be viewed here.

LGBTQ Nation was a community survey research partner alongside more than 100 other LGBTQ publications and organizations that informed LGBTQ people about the survey and referred them to participate in it. CMI partnered with Rivendell to form the study as well as Fugues Media and the International LGBTQ+ Travel Association (IGLTA) as translation partners.

Evangelicals fume as GOP gives up on same-sex marriage fight