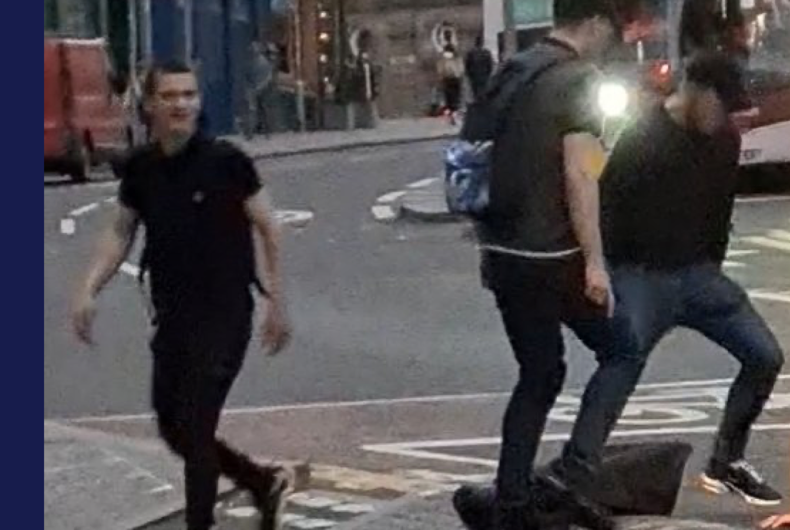 Three of the four alleged assailants as they continue attacking the victimPhoto: Screenshot/Twitter

Police are on the search for assailants that kicked, punched, spat on and robbed a couple this weekend to the point they were left “trembling” and needed attention at the hospital.

The police are looking for approximately four men in their twenties. The attack is being investigated as a hate crime.

Related: Ex-college student is sent to prison after coming out to try proving he’s not a neo-Nazi

The assault took place on the evening of July 30 near the center of New Town in Edinburgh, Scotland. The two victims were walking on Leith Street outside the OMNi Centre complex when the attack started.

The assailants were seen as they began kicking and punching the couple, continuing as the victims fell to the ground, bleeding while they left off with their belongings.

An eyewitness told the Edinburgh Evening News that the attack “was unprovoked entirely – the gay men did not fight back, they only tried to defend themselves.”

According to the eyewitness, “The boys were laughing, egging each other on and calling the victims ‘poofs,'” referring to a dated pejorative term for effeminates men. “Another girl (at the scene) heard them say poofs explicitly.”

Footage of the attack has been shared online. The Evening News found screenshots of the footage as one of the victims is being kicked and robbed in the middle of an intersection with traffic oncoming.

Other online users and eyewitnesses shared photos and other information they found.

I witnessed the assault of 2 gay men outside John Lewis tonight. These were 2 of the 4 assailants. If you recognise them I suggest taking it to the cops pic.twitter.com/1eiDR2gCzr

Only other screenshots I've got – the last screenshot is a guy who got up close but just watched and laughed for some reason – maybe he knows more since he got closer pic.twitter.com/zX4LmdvQ29

The video is horrific. Nobody did anything and it was totally unprovoked. The couple were a wreck afterwards. I'm still in touch with one of the victims, the concussion was severe- they can't remember a lot and I'm surprised they're OK.

Local bus company Lothian Buses said on Twitter that their police liaison will share any footage from their buses that may be relevant to Police Scotland’s investigation.

“We understand hate crimes can have a huge impact on those targeted, and an attack on people because of their sexual orientation, gender identity, race or beliefs, is not only abhorrent but will not be tolerated,” said Police Scotland Detective Investigator Mark McGraw in a statement.

He asked “anyone who was in the Leith Street area of Edinburgh at around 9.20pm on Friday, 30 July, and may have information that could assist with our enquiry is urged to contact Police Scotland, quoting reference number 3663 of 30 July.”

Police Scotland noted that the men “weren’t seriously injured” and are recovering.

The incident follows a week of other assaults in the Edinburgh area, including a priest beaten outside of St. Mary’s Cathedral on July 26 and a sexual assault of a woman on a nearby street on July 29.

We are appealing for witnesses following an assault and robbery in Leith Street, Edinburgh, on Friday. The incident is being treated as a hate crime.

Hi Anne, thank you for getting in touch. Our buses are fitted with CCTV & we will be happy to assist the police in their enquiries where we can.

For what it's worth, I have never felt more scared to walk around Edinburgh – my city, our capital city – holding my wife's hand.

Dinnae ken who needs to hear this, but this is still the reality of being gay, in Scotland, in 2021.

This is horrific. Hate crimes against LGBT people are on the rise. For many of us, being free to be ourselves requires constant risk assessments to ensure we are safe on our streets. If you have any info please contact @policescotland https://t.co/YT7q9uJYWE

This is bad- Right in the centre of Edinburgh in front of many people. No fear of being caught – but they must be stopped.

If you witness *any* type of homo/bi/les/trans phobia, or racism, or misogyny even if it’s not overt like this *don’t by a bystander* there is far more decent people out there than there are them. We stand together !

Anyone with info please contact @EdinburghPolice on 101 quoting incident no. 3636, 30 July to help catch perpetrators.

Edinburgh is a Proud 🏳️‍🌈🏳️‍⚧️ & safe City but this should worry us all.