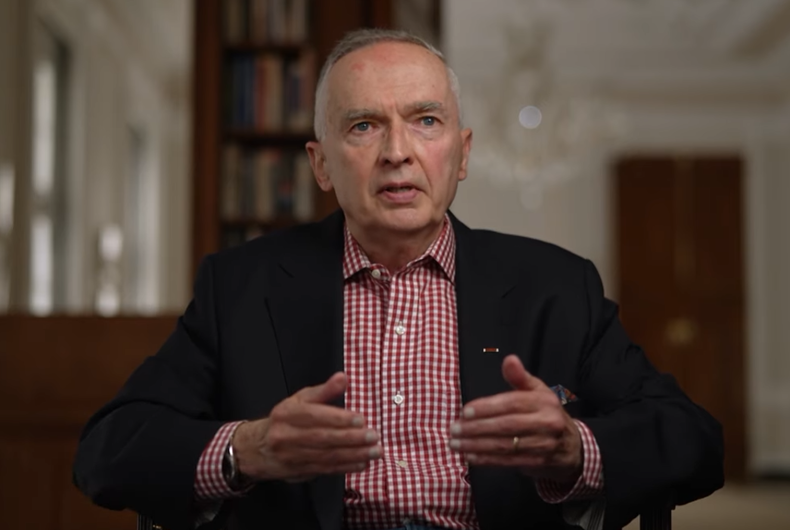 A former military officer and Fox News personality was among the many right-wing figures to dish on how Fox News has used bigotry, including anti-LGBTQ rhetoric, to fuel Donald Trump’s influence and his Big Lie election conspiracy theory in a new docuseries.

Lt. Col. Ralph Peters (Ret’d), who served as a military analyst for the network until publicly quitting in 2018, explained what it was like working with anti-LGBTQ personalities who learned how to enable the “freaks” in the Trump administration.

Fox and the Big Lie is a two-part introspective special from the Australian Broadcasting Corporation, and part two focuses on how the Trump administration laid the foundation for his stolen election conspiracy theory and lawsuits.

“The green room over the last several years into the Trump administration, when I left, the guests got more and more bizarre, more distasteful. I mean, [the] Green Room started to be like the bar scene in the first Star Wars film,” Peters said in a clip from the second episode. “[You say,] ‘these people are freaks.’ Ah, and then you realize, you’re one of the freaks!”

The interviewer asks Peters, “What do you mean by ‘freaks’?”

“People with no qualifications who could not even speak cogently,” Peters explained, “who could only speak the lines they’d memorized praising Trump, as though he were a heathen God that had to be appeased with slavish rhetoric.”

From the great Australian Broadcasting Company doc, “Fox and The Big Lie,” former Fox military analyst says, “The Green Room started to be like the bar scene in the first Star Wars movie. These people are freaks. And then you realize, you’re one of the freaks!” pic.twitter.com/f9SsN2qt7n

“The United States of America gave Rupert Murdoch a great deal,” Peters later added, “he repaid it by doing a great deal of harm.”

This isn’t Peters’ first time criticizing his former peers at the conservative network, owned and operated by News Corp. under Rupert Murdoch.

While working at Fox, Peters famously clashed with Tucker Carlson. Carlson regularly demeaned and denounced LGBTQ people all the way to the top of Fox’s viewership and ratings.

In 2017, Peters appeared on Carlson’s show and told the host that he was defending Russian leader Vladimir Putin, and Peters compared Carlson to a Hitler apologist. Carlson then mocked Peters for his past support of the Iraq War.

In 2018, Peters quit by writing a letter sent to Fox News staff, saying “Over my decade with Fox, I long was proud of the association. Now I am ashamed.”

Trump’s once-chief lawyer, Sidney Powell, also appeared for an interview in the series, only to walk off after being pressed about her past spreading of disinformation.

The Australian Broadcasting Corp has released an amazing documentary called, “Fox and The Big Lie.” Here, reporter Sarah Ferguson eviscerates Sidney Powell, causing her to walk off the set. pic.twitter.com/MWPZhXzgHq

They are finally able to coax Powell back to resume the interview. She quickly wishes she hadn’t. Ferguson: “Do you ever hear yourself and think it sounds ridiculous?” pic.twitter.com/tCrKv5uJ1J

The documentary was produced from a months-long investigation conducted by Four Corners, a team of investigative reporters that have worked for 60 years to focus on scandals and taboos.

Part One of the documentary aired on August 23, and Part Two, which is below, premiered on August 30. Both episodes are available on the Australian Broadcasting Corporation’s Four Corners website.

Nominations for LGBTQ Nation Hometown Hero close tonight. Who inspired you this year?