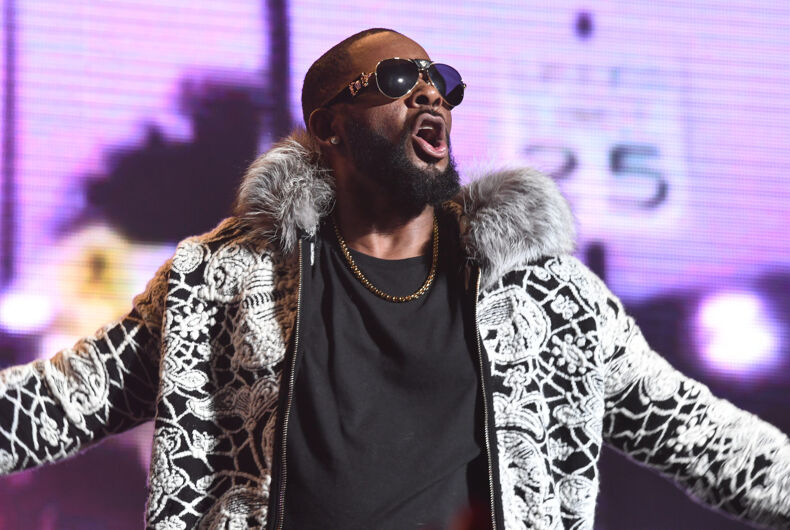 A man, testifying under the pseudonym Louis, accused R. Kelly of sexually assaulting him when the man was 17-years-old. He is the first male accuser to testify in the pop singer’s ongoing racketeering trial.

Kelly is accused of using his fame, wealth, and employees to prey on teenagers and young adults for sex. He has been charged with one count of racketeering and eight counts of violating the Mann Act, a law that punishes interstate sex trafficking.

Related: Two twinks bicker over undercooked chicken on X Factor and it is hysterical

The man told jurors he was 17 and working at a fast food restaurant when Kelly came through the drive-thru and gave him his phone number. The man was a high school student at the time.

An aspiring rapper, the young man testified that when they met privately Kelly asked him what he “was willing to do” before performing unwanted oral sex on him.

“He just told me we had to keep it between me and him,” the man said. Kelly allegedly told him, “‘We’re family now. We’re brothers.’”

He told jurors he continued to meet Kelly because he “really wanted to make it.” Kelly called him “little brother” and demanded the man call him “Daddy,” he claimed. He said Kelly recorded some of their sexual encounters.

He also recounted that Kelly pressured him to bring friends to parties at Kelly’s home. The singer allegedly groomed and started a sexual relationship with a 16-year-old friend of the accuser. At one point, Kelly requested the two have sex in front of him, but they refused.

He also told jurors about a separate incident where Kelly “snapped his fingers two times” and a naked “young lady” crawled out from under a boxing ring installed in the room. Kelly reportedly instructed the woman to perform oral sex on him and the accuser.

The man said he did not want to testify against Kelly, but the terms of a plea agreement with prosecutors in a separate criminal case required his cooperation. He was accused of helping Kelly attempt to bribe one of his female accusers to stop cooperating with authorities.

Four women have testified that Kelly groomed and had sex with them while they were underage as well.

The singer was reported to be “agitated” in the court room while the man testified despite remaining mostly impassive through the women’s testimony.