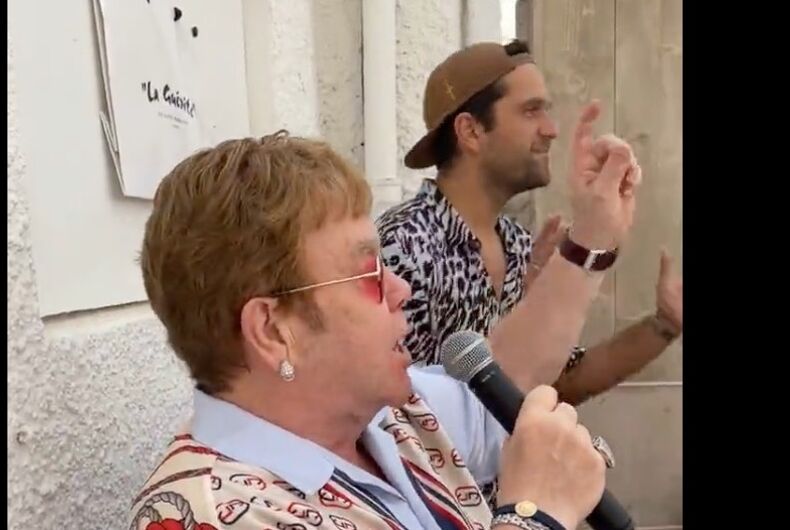 Elton John surprised diners with a performance at a beachside restaurant in Cannes.Photo: Screenshot

Even though Sir Elton John’s farewell tour has been delayed by the ongoing COVID-19 pandemic, the longtime, best-selling pop singer is still wowing audiences with an occasional surprise performance.

In fact, John recently recorded a live performance of his newest track while amazed diners hollered and danced along. He even shared the recording on his Instagram for everyone to enjoy afterward.

On Saturday, August 14, John surprised diners at the La Guérite beachfront restaurant in Cannes, France by unexpectedly performing his new track, “Cold Heart”, during his family’s vacation in the southeastern coastal city.

“During lockdown, I made this single,” John told the audience from the DJ booth as the DJ got ready to spin it. “It came out yesterday with Dua Lipa,” John continued, “so, I want you all to dance on your table and wave your hands and your handkerchiefs.”

The crowd, thankfully, didn’t follow his suggestion about standing on tables. However, many stood in their chairs and began smiling, swaying, cheering, and recording as he sang in rose-tinted glasses.

Though the song only lasted about four minutes, it’s obvious in his six-minute Instagram video that his performance left a lasting impression. The diners applauded, smiled, and lined up to catch a glimpse of the accomplished singer as a bodyguard led him out of the restaurant afterward.

“Cold Heart” isn’t the first time that John has teamed up with Dua Lipa. In April, they raised over $2.7 million for his AIDS Foundation during a virtual pre-show event for his Oscars after-party.

The video for the song dropped last Friday. It features animated versions of both artists in a groovy outer space setting filled with glitter, fish, stars and blossoming flowers.

Australian television is canceling Ellen DeGeneres as fans tune out

He was sentenced to 50 years in prison for the death of a trans teen. He is not the victim.