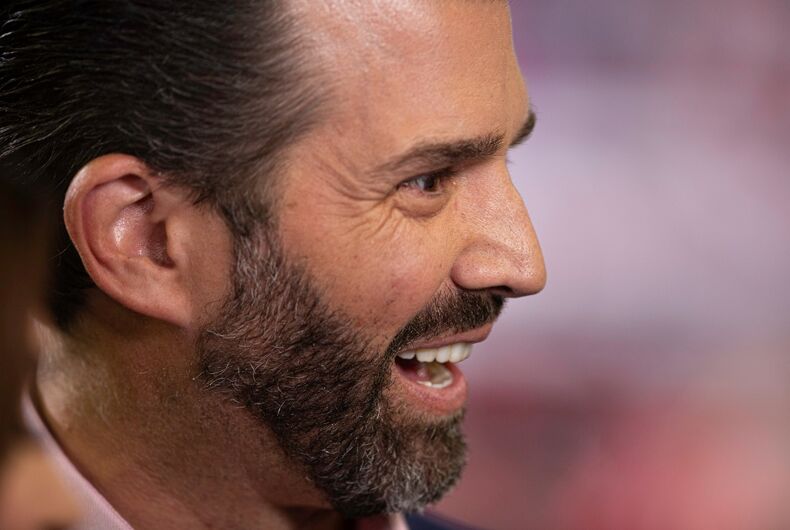 Donald Trump Jr. attacked the U.S. military on Twitter, saying that it failed to predict that the Taliban would launch a strike at Kabul, Afghanistan because generals were “too busy” learning about transgender people.

Responding to neoconservative Bill Roggio’s claim that the U.S. military is “directly responsible for the biggest intelligence failure” since the Vietnam War, the former president’s son made it all about trans and Black people.

“I can only assume that General [Mark] Milley was too busy reading the latest CRT literature and learning about the 97 genders along with their requisite pronouns to pay much attention to such trivial matters,” he wrote.

I can only assume that General Milley was too busy reading the latest CRT literature and learning about the 97 genders along with their requisite pronouns to pay much attention to such trivial matters. https://t.co/CHu4mbfUdM

Trump Jr. was referring to the Chair of the Joint Chiefs of Staff, who said in June that he didn’t believe the Taliban would force Americans to evacuate the U.S. embassy in Kabul like when Saigon was taken by North Vietnam in 1975.

“I may be wrong, who knows, you can’t predict the future, but I don’t see Saigon 1975 in Afghanistan,” Milley said at the time. “The Taliban just aren’t the North Vietnamese Army. It’s not that kind of situation.”

But U.S. soldiers were sent to Afghanistan to evacuate embassy staff from Kabul this week, and Republicans are saying that this is a failure of President Joe Biden’s withdrawal of 2500 troops from Afghanistan this past May, even though thousands more troops were withdrawn by the Trump administration in 2020 as a result of an agreement between the U.S. and the Taliban.

While the critics may want a perpetual U.S. presence in Afghanistan, they are turning their ire against the military itself, saying that it’s the military leadership that messed up here. And they’re tying the alleged mistakes to the accusation that the military has become too respectful of minority servicemembers.

“General Milley lost focus of his mission when he became consumed with trying to keep his job with the new woke crowd,” out former Trump administration official Richard Grenell tweeted without any evidence.

General Milley lost focus of his mission when he became consumed with trying to keep his job with the new woke crowd.

“The leaders of the Pentagon are more focused on race-baiting communist propaganda, political narratives, and prioritizing gender reassignment surgery over actually winning battles,” she wrote.

Milley was questioned by Republican members of Congress in June who said that the military is teaching “critical race theory” (CRT) because a book about racism appeared on the curriculum of an elective court at the U.S. Military Academy at West Point.

Milley said that CRT is not taught in the military, just in some classes at West Point because it’s a college.

“And I personally find it offensive that we are accusing the United States military, our general officers, our commissioned, non-commissioned officers of being, quote, ‘woke’ or something else, because we’re studying some theories that are out there,” he said.

The narrative that the military is too anti-racist and too pro-trans – and that this started just now in 2021, even though West Point’s curriculum did not change because of Biden – could be an attempt to turn it into an election issue for 2022 and 2024. Republicans have been focusing on opposing equality for minorities this year and keeping attention away from the economy and the pandemic.