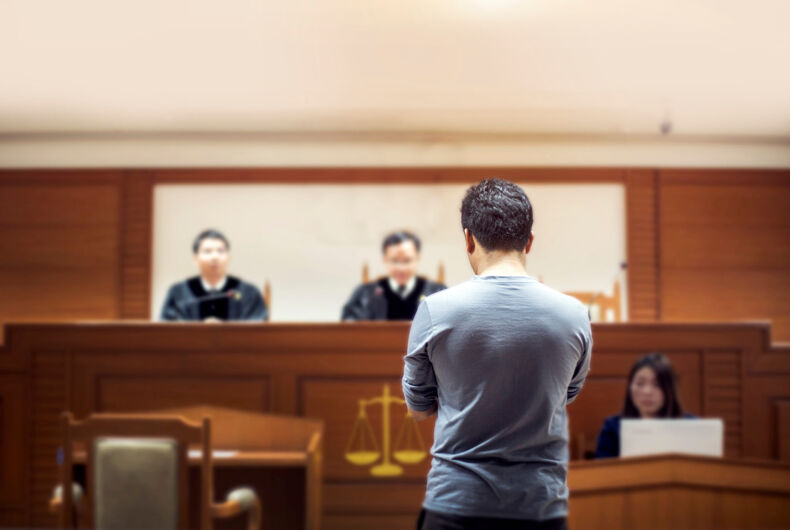 A “serial litigant” and religious zealot that recently attempted to claim his religious beliefs give him the right to put up anti-LGBTQ signs and revealed that he just can’t resist the urge to file lawsuits.

Savage who tried to sue a supermarket chain for taking down his posters attacking politicians with anti-gay slurs and accusations of being pedophiles, said “I’m addicted to it now” and that it’s a bigger rush “than heroin addiction.”

In Ireland, Savage has become known as the “‘PERVERT’ POSTER MAN” after he argued that accusing people of being “gay perverts” and pedophiles via posters was how he exercised his religious beliefs.

Sitting down for an interview with the tabloid Sunday World, Savage tried to explain that he’s not homophobic, he’s just against same-sex marriage and “the gay lifestyle.”

In 2019, Savage started putting posters up at his local SuperValu grocery store in Dublin that claimed without evidence that prominent politicians were actively participating in “the sexual exploitation of innocent children by gay perverts.”

Employees at the store would take them down, but Savage would put them back up. It got to the point where SuperValu banned Savage from coming into the store. Then he organized a protest of the business while promising to accuse employees of abusing children, and SuperValu began calling the police on him.

Savage then tried to bring them to court, claiming he was being discriminated against based on his religious belief.

The issue was bought in front of the Workplace Relations Commission (WRC), a non-judicial body entitled to handle common law issues in Ireland through independent Adjudication Officers. The WRC ruled that SuperValu acted reasonably in response to Savage’s actions, and also did not violate any anti-discrimination laws or Savage’s right to exercise his religion.

In short, the WRC ruled his complaint “entirely frivolous and vexatious.”

Now, he claims that “they” are trying to make him out to be hateful, when that’s not his goal.

“They’re trying to make it out to look like I’m a bigot. I’m not – I’m a Christian,” he said to Sunday World. “Of course, I don’t agree with the gay lifestyle. It doesn’t mean I’m going to threaten or discriminate against them or anything.”

He tried to explain that when he called a politician a “gay pervert,” he didn’t mean to call the pervert… gay.

“I meant a pervert of justice, does favours for insiders… that kind of perversion of justice,” he claimed. “It’s a play on words.”

He also told the tabloid, “I distrust authorities in general,” but “I keep an open mind.”

Naturally, he claims COVID-19 is a hoax and he believes masks are made to “control” and “condition” people, although he admits to wearing masks in court to avoid being jailed for contempt because it’s “not worth it.”

The spat with SuperValu was not Savage’s first time making a complaint against a business on the claim of discrimination.

In April, he lost a separate complaint before the WRC arguing that it was discriminatory for Ireland to run a “Best Young Entrepreneur Competition” that restricted the people who could participate by age. In 2019, Savage alleged that the University College of Dublin had also discriminated against him based on his religious beliefs. Both claims were dismissed.

Savage also accused former Irish health minister James Reilly of discriminating against him, and also another local politician of harassment before the WRC. Both failed.

In 2017, Savage claimed that the SEETEC Employment had also discriminated against him. The workforce agency of Ireland had advised him on his resume in a way he felt was against his religious beliefs.

Savage’s resume listed as one of his key achievements, “Standing up for and defending my religious beliefs which include that abortion on demand is evil and homosexuality is an intrinsic disorder inclined towards evil.” An employment adviser told him that may not help him get employment at many businesses.

Savage subsequently accused the agency of discriminating against him on the basis of his religious beliefs, but those were also dismissed by the WRC.

Savage has also made claims against Google, saying the search engine violated his rights by indexing a link to an article deeming Savage as “north County Dublin’s homophobic candidate” for office in the 2014 local elections.

So far, all of his claims before the commission have been unsuccessful.

Yet, he stands behind all of his legal claims, saying, “They could classify me as a sore loser, like a litigant person who doesn’t understand the law correctly, but I’ve been dealing with the courts and just became engrossed in legal textbooks and have a good collection of them now.”

“I’ve taken nearly two dozen complaints on religion grounds and every one failed,” he told Sunday World. “I’m addicted to it now. Rather than heroin addiction, it’s better to have this kind of addiction. It keeps your brain working.

“I could even sue Google [again] for me becoming addicted to litigation.”