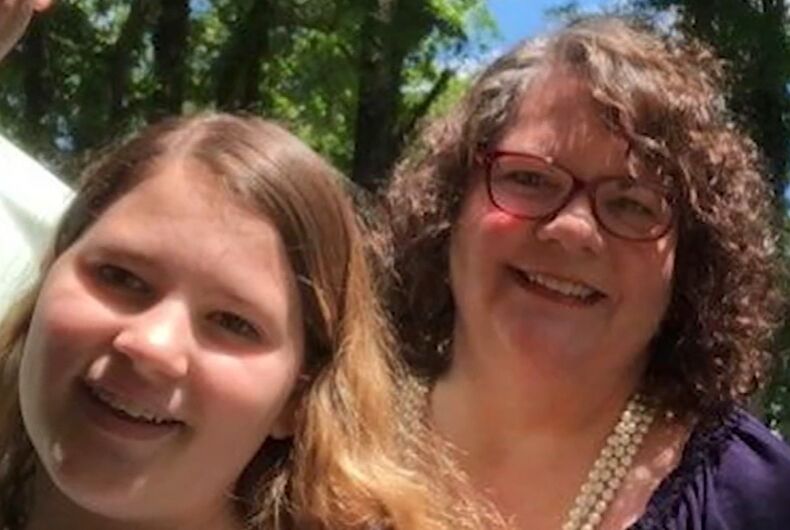 A mother in North Carolina became a lawyer because she knew she would have to fight for her transgender daughter’s right to exist. The advocate mom – with her daughter by her side – testified before the state legislature against a proposed transgender sports ban this year just after getting her law degree.

“My shirt says, ‘Protect trans kids,'” said Katie Jenifer about a picture of her with lawmakers at the North Carolina House earlier this year. “It’s why I get up every day and why I went through the three years of law school which was really tough, but especially a 45-year-old mom with kids at home.”

Jenifer’s daughter Madison knew she was a girl since she was a toddler, and Jenifer said that it was hard to make her present as a boy in public.

“I think God messed up,” Madison once told her mother as they left church. “I think I’m the girl and [her sister] Grace is the boy.”

Jenifer tried to get her daughter to dress as a boy in church and school, letting her wear dresses at home, until at five-years-old the girl told her mother she “saw parts of her body that didn’t align with how she felt, so she said she wanted to cut it off.”

“That really scared me,” Jenifer told the Guardian. “I hadn’t heard her speak like that before. I hadn’t known she was thinking of those kinds of things.”

She took her daughter to a therapist and the girl started to transition socially. She watched Madison transform from a “very withdrawn, depressed little kid to a very happy, vibrant, and outgoing kid. Literally overnight.”

But that’s also when she saw that the world wasn’t going to treat her daughter fairly.

Jenifer said that she tried to sign up for a “Mommy and Me” tumbling class for girls because Madison’s friends were there, but they weren’t allowed to enroll.

When Madison was eight, Jenifer got a call from the parks and recreation department telling her that her daughter couldn’t play softball on a girls’ team.

And when Madison started school, a TV crew showed up on the first day of school to interview parents about her daughter attending a girl.

“That was the first moment where I asked myself if we’d need a lawyer,” Jenifer said.

But when North Carolina Gov. Pat McCrory signed H.B. 2 in 2016 – a bill that severely restricted transgender and LGBTQ rights –
Jenifer decided to become a lawyer.

She enrolled at the North Carolina Central University School of Law and went on to earn her J.D. in her 40’s. She joined the National LGBTQ Task Force as a fellow while in law school.

Jenifer got her degree just in time. North Carolina, like dozens of other states, considered a law this year to ban transgender girls from participating in school sports. Jenifer knew she had to stand up against it, both because Madison like sports – she plays softball and is a cheerleader – and also because of the “shame” that comes with an “atmosphere where it’s okay to attack these kids.”

She knew it was important for state lawmakers to actually meet a trans young person, so she went with Madison to testify before the state’s House Judiciary Committee.

“I’m glad I was there and I could hear what they were saying and trying to argue – that they were right and we were wrong,” Madison later told ABC 7. “It was difficult to hear them say trans kids aren’t real boys or girls. It’s hard to hear them contemplating my existence.”

Jenifer also understood how hard it was for her daughter to hear the testimony against trans youth.

“For Madi to hear people debating her very existence, and whether or not she has a right to be who she is, that’s going to leave an imprint for the rest of her life,” she told the Daily Tar Heel. “And for what?”

But the tireless mother said that it was important to stand up against the bill because “it’s not just words on a paper.”

“These are real lives that are going to be impacted,” she said. “How sad and what a shame.”

Madison is growing up in a home where her mother listens when she talks about the pain of being attacked just for being who she is and is learning to stand up for herself from her amazing mother.

“I don’t even think my mom knows this, but in school, in first grade, people wouldn’t address me as my preferred pronouns. They’d call me ‘it,'” the tween said in an interview.

Maybe the mom’s testimony persuaded someone in the end. Several weeks after she testified, House Speaker Thomas Moore (R) said that the bill wasn’t necessary since there hadn’t been a single complaint about a transgender student-athlete in the state, and only 10 trans students have even asked to play sports in the state in the last two years. Moore said that the bill wouldn’t advance out of committee and was effectively dead.

“I think I might like to try diving,” Madison said now that she’s about to start high school. She said that she’s not competitive but she likes sports with her friends.

“I like that feeling of flying through the air,” she added.

Mike Pence would like to be President. But no one likes Mike Pence.