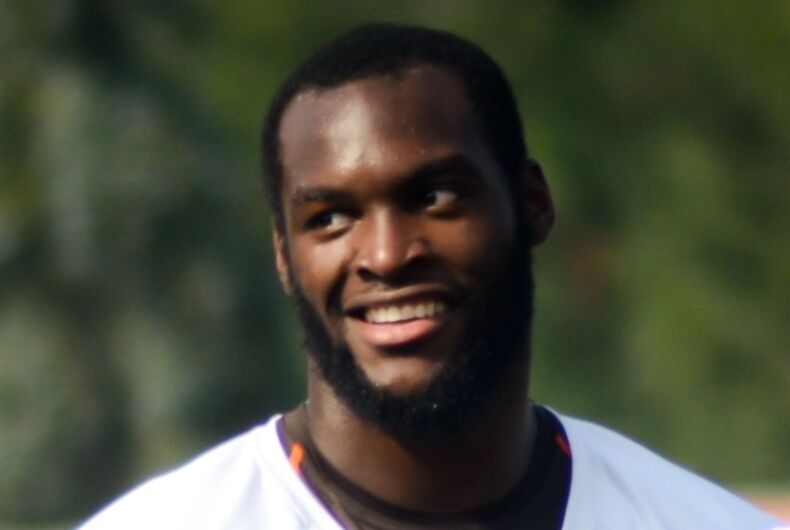 Mingo turned himself in to authorities and was released on a $25,000 bond. He was released from his contract with the Atlanta Falcons shortly after.

Related: Boston Pride abruptly shuts down because the community “needs and wants change”

“The allegations out of Tarrant County against my client are completely baseless. Barkevious Mingo is innocent,” his lawyer, Lukas Garcia, told SI. “At this stage, our side has very limited information. What we do know is these allegations are from over two years ago and are completely untrue. Mr. Mingo is the victim of a false claim, and we believe this is motivated by money or some other ulterior motive. We are confident when the truth comes to light, my client will be fully exonerated.”

The victim’s mother contacted authorities about the incident in 2020.

Police records allege that Mingo groomed the teen family member by taking him and another male friend to an amusement park and buying the two boys items. They ate at a steakhouse before returning to the hotel where they were staying.

The victim claims that he fell asleep and woke up in the middle of the night to find Mingo in bed with him. He says he fell back asleep but “thought it was odd.”

“The victim was then woken by [Mingo] pulling at his underwear,” charging documents allege. “This occurred for a few minutes until the suspect got more and aggressive and pulled the victim’s underwear down to his shins. The victim advised that when this was occurring, he was scared and pretended to be asleep. [Mingo] put a lotion on that made the victim’s skin burn and … rubbed his penis up and down, in between the victim’s butt crack.”

Authorities got a search warrant for purchases Mingo had made, saying “purchasing gifts for children is a known ‘grooming’ behavior in Child Sexual Abuse cases.”

Mingo, who has played for the Cleveland Browns, New England Patriots, Indianapolis Colts, Seattle Seahawks, Houston Texans, and Chicago Bears, is not out as gay or bisexual.