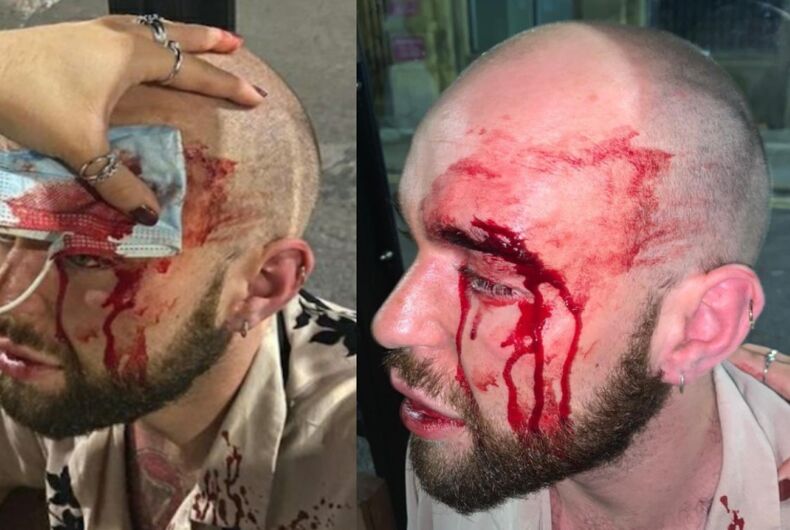 A 24-year-old gay man was left bleeding from cuts on his face and head after he was attacked by a violent group of men late this past weekend.

“If this is what being gay means, then I don’t want to be gay,” Aodhán Benson told the Liverpool Echo just after the attack. “Literally, if this is what my sexuality results in, then I’ll not be gay then, if you just leave me alone.”

Related: Gay couple beaten after kissing in a subway station by man yelling “Aren’t you ashamed?”

Police say that they were called to a Tesco grocery store in Liverpool at 12:25 a.m. on Saturday. They found Benson bleeding and he said that he had been attacked after a man he did not know approached him and his friends and started talking.

At some point in the conversation, Benson referred to the man as “love.”

Benson then told the man to “fuck off.”

“He went, ‘Don’t speak to me like that, you faggot cunt, you gay faggot cunt.’ And then he punched me. Now, I have to fully put my hands up, I hit him back.”

Benson said that he wanted to fight back , but then two other men that the alleged assailant knew approached them and started to beat him too.

“It was just really scary, just because like, when all three of them were hitting me, I was like ‘Oh my god what if I die?'” he said.

“I know that sounds so dramatic, and I hate being so, I don’t know, dramatizing it, but the boy that died on Hanover Street as well. I was like, ‘What if I actually die?'” He was referring to a man who was killed after a soccer match in Liverpool last week.

Benson said that his friends came to help him and tried to take pictures of the men for police as they ran off.

Police took him to the hospital when they arrived and he received treatment for a busted lip, a black eye, a swollen nose, and a cut above his eye.

“This was an appalling incident which left a young man shaken and injured,” Merseyside Police Chief Inspector Col Rooney said. “Although we have made arrests, our investigations into the attack will continue.”

“As well as physical violence, we believe that homophobic slurs were directed at the victim and we are treating the attack as a hate crime.”

Police said that two men have been arrested in connection to the attack and that their investigation in still ongoing. According to the Belfast Telegraph, a 43-year-old man on a charge of assault and a 33-year-old man was arrested on an assault charge and a drug charge.

Benson has talked about the attack on social media.

“’Faggot gay cunt’ was what I heard before four men assaulted me in Liverpool not far from where someone died in a similar attack I hate peoples sometimes but the support I’m receiving makes me love them also,” he tweeted.

“Faggot gay cunt” was what I heard before four men assaulted me in Liverpool not far from where someone died in a similar attack I hate peoples sometimes but the support I’m receiving makes me love them also pic.twitter.com/smKZt3N9ov