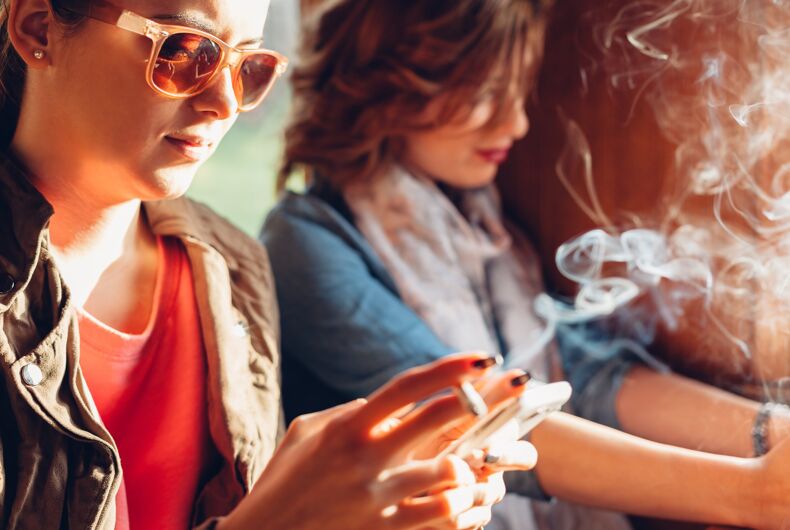 Using data from 2015-2019, the study found that among smokers 18 and older, 54 percent of bisexual women and 50 percent of lesbian/gay women preferred menthol cigarettes, compared to 39% of smokers in the general population.

Related: More than half of LGBTQ adults in the US have been threatened with physical violence

Menthol is the only cigarette flavor currently allowed by the FDA and is thought to make smoking more appealing. A report from anti-smoking nonprofit Truth Initiative described menthols as “easier to use and harder to quit.”

Thus, with bisexual women in particular at a higher risk of substance abuse, the availability of menthol increases the likelihood that members of this community will become addicted to cigarettes.

“There is a lot of research showing that bisexual females report disproportionately high rates of substance use, including cigarette smoking,” said Ollie Ganz, lead author of the Rutgers study. “Our study confirms that this is also the case for menthol cigarettes. Given what we know about the impact of menthol on initiation, nicotine dependence and quit success, these high rates of menthol use among bisexual female smokers may be exacerbating cigarette smoking disparities.”

According to the Truth Initiative report, the broader LGBT community is also disproportionally impacted by all types of tobacco, with 36% of LGBT smokers saying they usually smoke menthols.

The report also found significant tobacco use among queer women youth, with LGB female youth being three times more likely to use cigarettes and cigars and twice as likely to use e-cigarettes than straight females.

The study said the increased risk for tobacco use among LGBT people is in part due to targeted marketing by tobacco companies.

In April, the FDA announced it would soon implement new standards that aim to ban menthol cigarettes, as well as all cigar flavors. The announcement cited studies that show banning menthol can help people quit and save hundreds of thousands of lives.

“Banning menthol—the last allowable flavor—in cigarettes and banning all flavors in cigars will help save lives, particularly among those disproportionately affected by these deadly products,”said Acting FDA Commissioner Janet Woodcock, M.D., in a statement. “With these actions, the FDA will help significantly reduce youth initiation, increase the chances of smoking cessation among current smokers, and address health disparities experienced by communities of color, low-income populations, and LGBTQ+ individuals, all of whom are far more likely to use these tobacco products.”

The announcement said enforcement of the ban would focus on retailers, manufacturers, distributors, and the like, and would not punish individual consumers for possessing or using menthol cigarettes.

This week, Washington D.C. decided not to wait for the FDA and issued its own ban of menthol cigarettes and flavored tobacco. Mayor Muriel Bowser signed the Flavored Tobacco Product Prohibition Amendment Act of 2021 on Wednesday. In a statement, Bowser called the reduction of tobacco use a “health equity issue,” citing disproportionate use among Black residents.

Provincetown COVID cluster balloons to over 250 infected since July 1