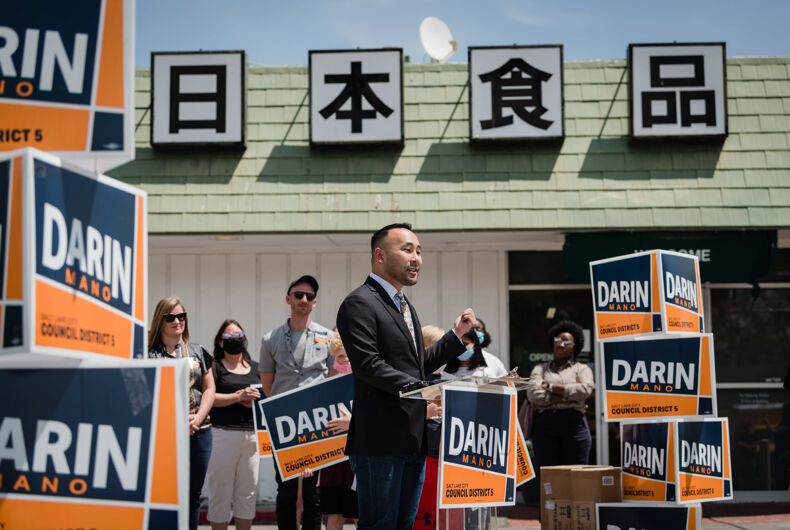 Utah Assistant Attorney General Steven Wuthrich gets cranky when he doesn’t get his nap.

At least that’s his excuse for a temper tantrum he threw after being woken up by Salt Lake City Council Member Darin Mano. Wuthrich sent Mano an email telling him to “die and go to hell” in the explicative-laden messages.

Related: A gay couple endured years of anonymous hate mail. Then they found out who was sending it.

Mano was knocking on doors to drum up support for his campaign when he stopped at Wuthrich’s home. When no one answered, he left a campaign flier in the mailbox. When Mano returned from handing out campaign materials and talking to voters, he found the email from Wuthrich in his inbox.

The message, shared on the out council member’s Facebook page, said that he hated Mano, his family, supporters, and the campaign team.

“The part that actually affected me was the ‘I hate your family,’” Mano told the Washington Post, “more than any of the other words that he used.”

“On a nice Saturday afternoon myself and my wife and my downstairs tenant were all taking a lovely siesta when some motherfucking ignorant son-of-bitch rang our doorbell and put your piece shit unwanted solicitation in our door waking the dogs and waking us and the neighbors with an uproar,” Wuthrich wrote. “I will do everything in my power to see you never get elected to any office higher than dog catcher.”

An Asian American, Mano said he felt it was his duty to report the incident and share it. Hate crimes against Asians and LGBTQ people have risen dramatically over the past few years; the pandemic only fueled discrimination against Asians after former President Donald Trump blamed China for COVID-19.

Mano is married and has four children with his husband. His family is featured in the fliers.

“As an Asian American and member of the LGBTQ+ community, I must stand up against hate speech and call it out when I see it,” Mano said.

Now that the Attorney General’s office is investigating, Wuthrich has changed his tune, saying he reacted with “undue anger.”

“Since then, I have regretted the ferocity and language of that email. My words were uncivil and unprofessional,” Wuthrich told the Salt Lake Tribune. “From me personally, I apologize to Salt Lake City Councilman Darin Mano and his family.”

“I’m hopeful this has been a learning experience for us all that we need to slow down, think before we react, and treat each other with kindness and respect,” Mano said in a statement after the apology. “I am still Mr. Wuthrich’s representative and the invitation to hear his views about Salt Lake City and District 5 remains open.”

A troll tried to attack trans lawmaker Danica Roem online. It completely backfired on him.