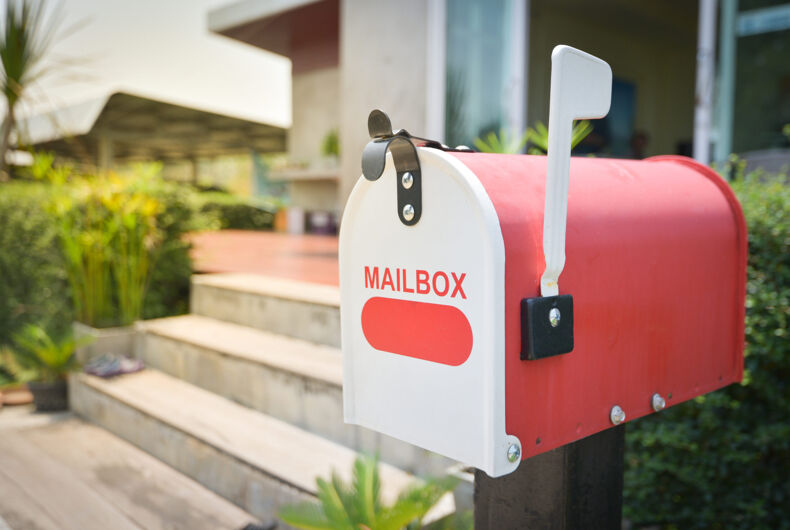 LeeMichael McLean and Bryan Furze endured years of anonymous anti-gay harassment at their home in Milton, Massachusetts, but a remarkable turn of events has freed them from the abuse.

Handwriting analysis led them to the perpetrator who confessed to police that he was responsible. It was their friendly neighbor who always waved and made casual conversation.

The men are upstanding members of their community, proud parents, and served in local government. But that’s when things turned ugly, they say.

They started receiving dozens of magazine subscriptions with homophobic names on them. The men were confounded and police were unable to help since most magazines don’t require pre-payment. The perpetrator didn’t use a credit card that could be traced.

For five years the couple got magazines, newspapers, and solicitations under the offensive fake names. It stopped during the pandemic, but when the neighbor tried to resume the harassment, he made a major mistake.

He signed the couple up for a subscription to the Boston Globe, but the men already had a subscription. The paper sent them back the order request, made under the name “Michelle Fruitzey,” a play on the couple’s real names. The subscription request was handwritten.

“Thanks for taking a look, neighbors,” McLean said when he posted the story of what was happening along with a photo of the subscription card on a local neighborhood website. He quipped that the “joke is on them. What gay guy doesn’t want free issues of Vogue and Cosmopolitan?”

Their neighbors were stunned and quickly sprang into action. #iammichellefruitzey started trending as locals started hunting down who was responsible.

One resident submitted a Freedom of Information request for town election records and methodically went through them to try to match the handwriting. And they got a hit.

When detectives questioned the man, he confessed. He lived two doors away from them and had served with the couple as Town Meeting members.

“There was never any outward hostility,” Furze said.

“He told the officer that he was motivated by our outspokenness and our opinions about Milton’s politics and Milton’s future. I have some doubts about that.”

Still, the men have taken a negative and turned it into a positive. They’ve started selling T-shirts with the hashtag emblazoned on it for $30 each to help endow a scholarship for queer students. So far they’ve raised over $12,000.

“For us, this is not really about broadcasting the bad. It’s about embracing the good and finding ways to blow it up into something bigger,” Furze said.

“We can own this slur, this name, and feel better about it,” McLean added.

Gay couple gives back to the community to celebrate 25th anniversary