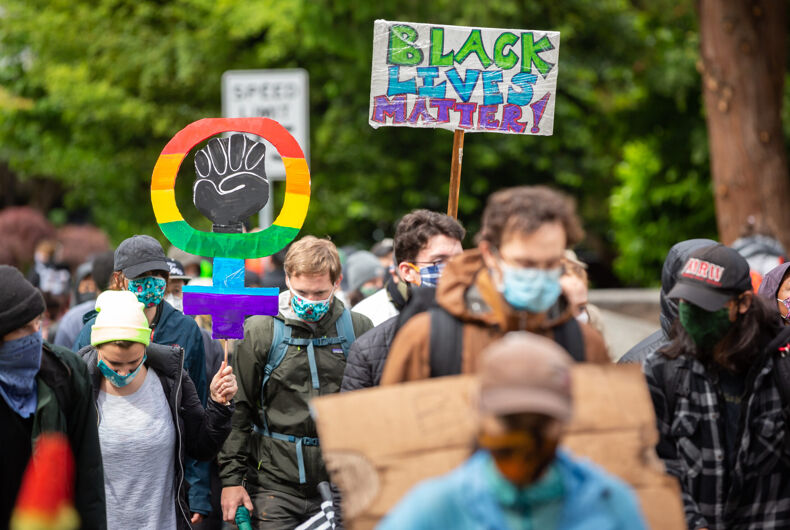 Protester with a rainbow BLM face mask raises a fist in solidarity during the "March of Silence" in Seattle on June 12, 2020Photo: VDB Photos / Shutterstock.com

A Pride event for Black LGBTQ people caused a stir in the Seattle LGBTQ community after they announced they would charge white people a “reparations fee” to attend. The Taking B(l)ack Pride festival on June 26 charged white attendees between $10 to $50.

Capitol Hill Pride, another group that had a festival in a different park the same day, sent a letter to the Seattle Human Rights Commission claiming their human rights were violated by the policy – and got a shockingly blunt reply. The commission is an independent advisory board of the city made up of civil rights leaders from the Seattle area.

Related: This LGBTQ non-profit is accepting ‘reparations’ from folks who still eat at Chick-Fil-A

Seattle PrideFest, Capitol Hill Pride, and Take B(l)ack Pride were all holding separate events at the same time as the dedication of the AIDS Memorial Pathway also nearby in Capitol Hill.

Neither Capitol Hill Pride nor Taking B(l)ack Pride is city-sanctioned, nor are they behind the Seattle Pride celebrations, which Seattle PrideFest handles. While PrideFest planned completely virtual events for the weekend, Capitol Hill organized a separate march and festival that coincided with the Black Pride event.

For the second year in a row, Taking B(l)ack Pride organizers asked white people who want to attend an event geared for Black LGBTQ community members to pay a “reparations fee.” The fee went toward paying performers and ensuring that the Black members and members of color can enjoy a space centering them for free.

The event is led by Momma Nikki, a local community advocate and music artist, and is sponsored by the local organizations Trans Women of Color Solidarity Network, Queer the Land, and Alphabet Alliance of Color.

While Take B(l)ack Pride’s policy was instituted last year as well, Capitol Hill founders Charlette LeFevre and Philip Lipson took exception this year to what they called “reverse discrimination.” They sent a letter to the commission complaining that they were being “attacked” with “hostile emails” for refusing to support the event.

“We will never charge admission over the color of a person’s skin and we resent being attacked for standing in those values,” they wrote.

“Thank you for reaching out to the Human Rights Commission and the NAACP,” the commission responded. “While we appreciate your thinking of us to help with this issue, we must, unfortunately, advise you to advance on this issue without the participation of the Commission.”

They explained, “The unique nature of your situation does not in fact violate any of your human rights as stated in the UN Declaration of Human Rights, which is the charter by which our Commission operates.”

Asking the complainants to “examine the very real social dynamics and ramifications” of their claims, they note, “Black trans and queer peoples are among the most marginalized and persecuted peoples within the LGBTQIA2S+ community. They often face shame not only from the cis-heteronormative community, but within the queer community at large as well.”

The commission believes that “in making the event free for the Black Queer community, the organizers of this event are extending a courtesy so rarely extended; by providing a free and safe space [for Black trans and queer people] to express joy, share story, and be in community.

“We would like to recommend, if possible, that you educate yourself on the harm it may cause Seattle’s BIPOC community in your pursuit of a free ticket to an event that is not expressly meant for you and your entertainment,” they said.

They added that “If you still take issue with this and [the decision] would resonate better with a reason explained from a white or white passing member of the queer community, we would be happy to connect you with a number of allies.”

Supporters of the policy note that reparations bring equity to the affected communities, and economic disadvantages and racism have kept people of color and descendants of slaves have from having the same opportunities as white people.

Critics claim it is “reverse racism” and discrimination against white people because it holds them to a different standard based on their skin color.

The group clarified after “misinformation” spread that the reparations’ fee is simply a “consensual transaction/donation from folks who support our community and our event,” and there is no “race police” checking anyone’s ethnicity or attempts to force white people to pay to attend.

“We are not and have never been in the business of forcing people to come to Black and brown, trans Pride events,” they stated.

Now, the Office of Civil Rights is aware of the situation and may begin an investigation, the Seattle Times reports.

Several participants in Capitol Hill events canceled their appearances and supporters of the group have criticized them since the letter came out, leading LeFevre and Lipson to apologize.

City Council President and candidate for mayor M. Lorena González, said that she ‘will no longer be attending Capitol Hill Pride after reading their letter.”

“After a year that has taken an unbelievable toll on all of our communities, I was looking forward to this opportunity to celebrate Pride in person,” she said. “However, I simply cannot support an organization that is trying to stop Black people in the LGBTQ+ community from celebrating Pride in the manner that they choose.”

Outside of that, all of the different Pride events in the Seattle area went on as scheduled without incident.

Meanwhile, Seattle Pride announced that they are returning to hold a “Capitol Hill PrideFest” in Capitol Hill, in-person, on September 4 and 5.

“PrideFest has no association with Capitol Hill Pride, run by Charlette LeFevre and Philip Lipson,” they made clear.

2/2) However, I simply cannot support an organization that is trying to stop Black people in the LGBTQ+ community from celebrating Pride in the manner that they choose.