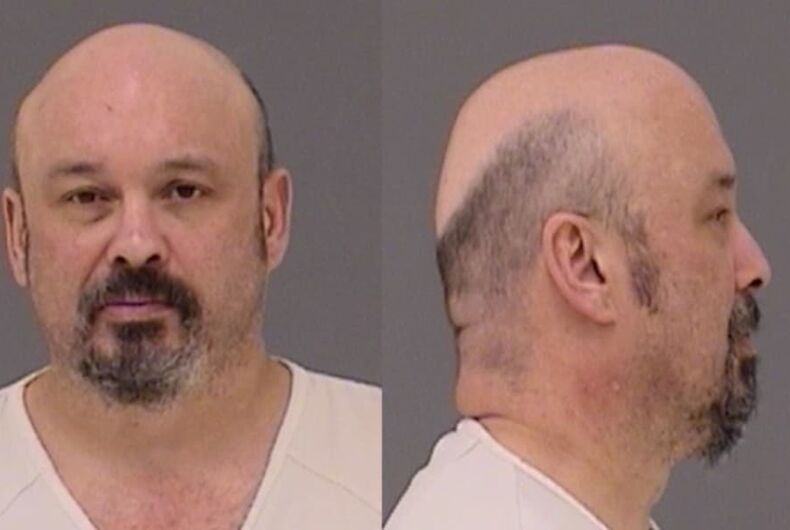 A man who beheaded a dog with a chainsaw is facing federal hate crimes charges in an unrelated matter for shooting into someone’s house in order to “get rid of the lesbians [and] gays.”

Montana’s Department of Justice issued a release saying that John Russell Howald, 44, has been indicted by a grand jury on charges related to allegedly shooting a weapon into someone’s house out of hatred for “their actual and perceived sexual orientation” on March 22, 2020.

Related: After a trans woman’s cat was cut in half in a gruesome hate crime her neighbors painted her house

He is being charged with a hate crime under the Matthew Shepard and James Byrd Jr. Hate Crimes Prevention Act and a firearms charge. If convicted, he could be sentenced to a minimum of 10 years of prison to life on the hate crimes charge, as well as a sentence for the firearms charge.

This isn’t the first time Howald has had trouble with the law. Court documents paint him as a violent, sadistic person with a “tribal band with a confederate flag” tattoo on his left arm and a swastika tattoo on his left forearm.

In 2006, he was convicted on charges of animal cruelty, according to information in the Montana Department of Corrections database, after he shot a chocolate Lab at a public campsite.

An article from the time says he “pursued the wounded Lab around the side of a trailer and then into the trees and shot at it a number of times, then came back to the campsite and got a chainsaw and severed the dog’s head.”

“Howald then allegedly drove to a campsite occupied by Mike and Brenda Sullivan of Butte and threw the severed head of their dog at them, saying ‘Here is your fucking dog back,'” the article said.

The U.S. Attorney’s Office in Montana confirmed that this is the same person now facing the hate crime charge, and he had to serve 24 months in prison for animal cruelty.

In another incident, Howald threw a beer bottle at a child at a campground in Montana. The kid’s father came to confront him and then turned to walk away, when Howald then allegedly shot his gun at the father without hitting him. The father said Howald was “clearly intoxicated.”

Howald has a hearing scheduled for June 29 before a U.S. Magistrate Judge in Great Falls.

The U.S. embassy at the Vatican is flying the Pride flag & the right is flipping out