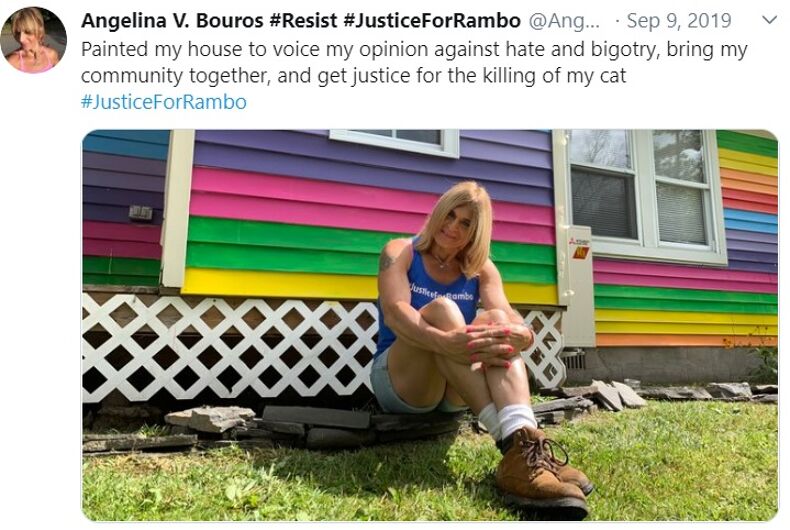 Angelina Bouros in front of her rainbow house in a tweetPhoto: Screenshot/Twitter

A transgender woman in New York said that she has been receiving threatening messages from an anonymous neighbor for years for her rainbow flag, harassment that resulted in her cat being killed and cut in half.

So her community pulled together and painted her house rainbow colors in response to the hatred.

Related: Blind transgender woman beaten by mob of teens as she got off a bus

“I had put a rainbow flag on my house,” she told Now This News. “And somebody around here didn’t like the fact that the rainbow flag was up.”

She said that she ended up getting four profanity-laden hate mail letters from the neighbor, who never identified themselves.

In June 2019, Bouros found her cat Rambo behind her house. He had been killed and cut in half, and the letter-writer claimed responsibility.

This was my little boy Rambo and this is what someone in my neighborhood did to him. I am heartbroken. #JusticeForRambo pic.twitter.com/2Zqd5Wbay0

“I don’t have any children,” she said, “so my cats are my children. And I love them as much as a person could love a pet.”

But she said that the gruesome act made her “determined to stand up even more.”

Bouros didn’t know who sent the letters, so “the only way for me to push back was to paint my house,” she said. “And not only for my sake, but to let the community know why I’m doing this, that I had to take a stand against hatred and bigotry.”

She posted about her plan to paint the house on Facebook and it turned into a community event.

“I didn’t quite expect that it was going to be that many people here,” she said, adding that people kept “pouring in” throughout the day to help paint and set up a grill and play music.

“It just made me feel great.”

The house is painted but the party is JUST starting!

Yesterday was a 100% SUCCESS! Thanks to ALL who came in support & contributed! THIS is WHAT a community does for each…

“That is what community is all about: standing together and fighting back against hatred and bigotry,” she said.

She also hopes that her story will inspire other trans people to be themselves.

“Don’t allow other people to dictate who you are and can and cannot be,” she said. “When we stick together, we are stronger.”

‘They picked the wrong person to pick on’ — Trans woman Angie Bouros became the victim of hate speech and violence after flying a rainbow flag outside her home.

So what did she do?

She and hundreds of community members painted her whole dang house rainbow🌈 pic.twitter.com/PMhGzgFGHS