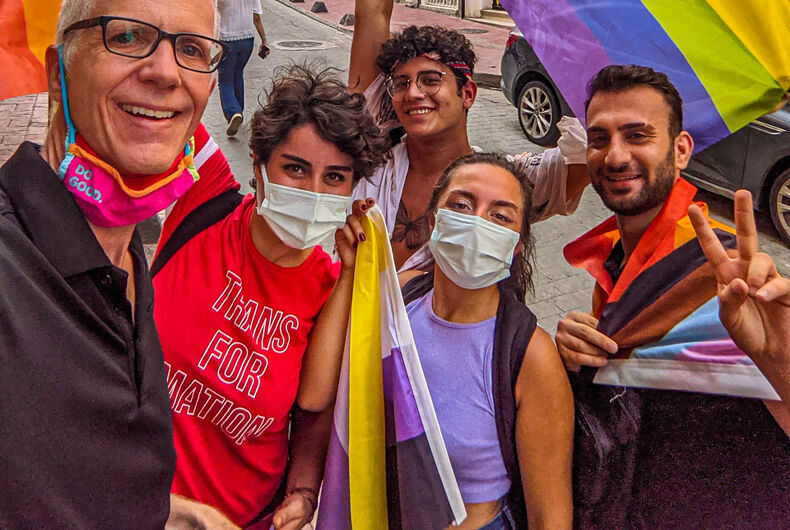 My husband Brent and I are currently visiting Istanbul, Turkey. Last week, on June 26, we attended the city’s Pride March, which has been shut down in recent years by the increasingly conservative government.

I rightfully had concerns, but things were going better than I expected.

Yes, authorities had denied the parade a permit, and blocked off the main streets around Taksim Square, the location of many protests, to prevent an unauthorized march.

But about a thousand determined marchers gathered together anyway, and began marching down side streets.

This was partly because, in past years, the police have used water-cannons to break up the crowd, but the side streets are too narrow for such cannons.

We had been warned by local friends that violence might erupt. In fact, people had warned us not to go to the march at all. Pride celebrations in Istanbul have grown increasingly confrontational since the last official one had taken place in 2014 — 100,000 people had marched in that one.

Since then, the government has denied permits for marches, or any LGBTQ public gathering for that matter. Each year, when activists marched anyway, police reacted with force.

Even a picnic that Istanbul Pride tried to hold earlier this week saw police backlash, with officers detaining several activists and reportedly leaving one picnicker with a broken arm.

Despite that, many in the LGBTQ community chose to turn out once again for the march on Saturday. And we wanted to show our support by joining them.

At the march, people waved flags, chanted loudly in Turkish, and reveled in their swelling numbers, which were the result of calls to action on social media. The mood was festive and defiant, but there was also an aura of unease.

Later, we learned that unease was warranted. We hadn’t seen any violence yet, but violence had already erupted elsewhere.

At different gathering spots earlier in the day, rubber bullets were fired at the crowd not far from our apartment, and a journalist and two dozen activists were detained.

Soon, the violence arose again, and this time it reached us. The police, donning riot gear, began firing cannisters of tear gas into the crowd.

We’d taken a break to sit for a moment, but we heard the “pop, pop” of tear gas cannisters being launched into the crowd. Almost instantly, we started choking and coughing, and had to quickly clear the area. Facing tear gas was even more painful than I would have expected.

Marchers rushed to get away from the gas — but as they ran, many defiantly shouted, in Turkish, “We won’t shut up, we are not afraid, we do not obey!”

When you look up “pride” in the dictionary, the first definition is “a feeling of deep pleasure or satisfaction derived from one’s own achievements.”

This is exactly what the Turkish people who marched here in Istanbul on Saturday should feel.

But it is the second definition of “pride” that I think truly encapsulates the kind of pride we witnessed: “the consciousness of one’s own dignity.”

Despite living in a country where government officials have called LGBTQ people “freaks” and “degenerates” and made it clear they will use force against them, these brave Turks insisted on demonstrating their own dignity.

Pride lives all over the world in 2021. But it’s especially strong, and really moving to see, in the people who marched last weekend here in Turkey.

Michael is part of Brent and Michael Are Going Places, a gay digital nomad couple. Now get his travel insights and observations delivered directly to your inbox by subscribing to their newsletter.

Pro sports have struggled with inclusion. Carl Nassib’s coming out can change that and more.