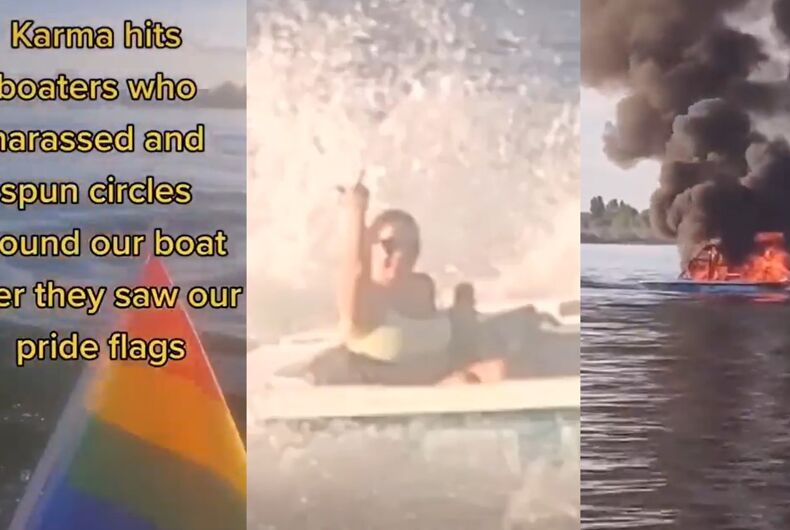 Passengers flipped off another boat that had Pride flags just before their boat exploded.Photo: Screenshot/TikTok

A boat full of people who were harassing LGBTQ vacationers caught fire and exploded, and video of the incident has gone viral on social media as people proclaim “#KarmaIsReal.”

“These people harassed my family because we were flying gay pride flags in Moses Lake, Washington, by racing around us and shouting gay slurs,” said Twitter user @retro_ushi_. “Then, their boat literally blew up!”

They are a trans and queer health care professional, according to their bio, and they added that the boat’s driver “literally shit his pants and everyone saw when his shorts fell off in the water,” according to Newsweek.

The video, which was posted to TikTok, says that the offending boat “spun circles” around theirs “after they saw our Pride flags.” The video zooms in on a person in the other boat flipping them off.

Later, smoke is coming from the boat and the three people who were in it are swimming. They had life jackets and @retro_ushi_ said on TikTok that the people in their boat “got them out of the water immediately” because “we were nicer than they were.”

Another boat comes to put out the fire in their boat and later their boat is shown charred and destroyed.

We safely got them out of the water immediately. We were nicer than they were. #pride #lgbtq #boat #Fail #Karma #Gay #hate #sorrynotsorry

Video of the event pic.twitter.com/JYLqulzqea

The video has been viewed almost 100,000 times on Twitter so far and almost five million times on TikTok, where @retro_ushi_ wished everyone a “Happy Pride Wrath Month.”

We will not go quietly into the night! #PrideMonth #gaypride #lgbt #trans #flags #pride2021🏳️‍🌈