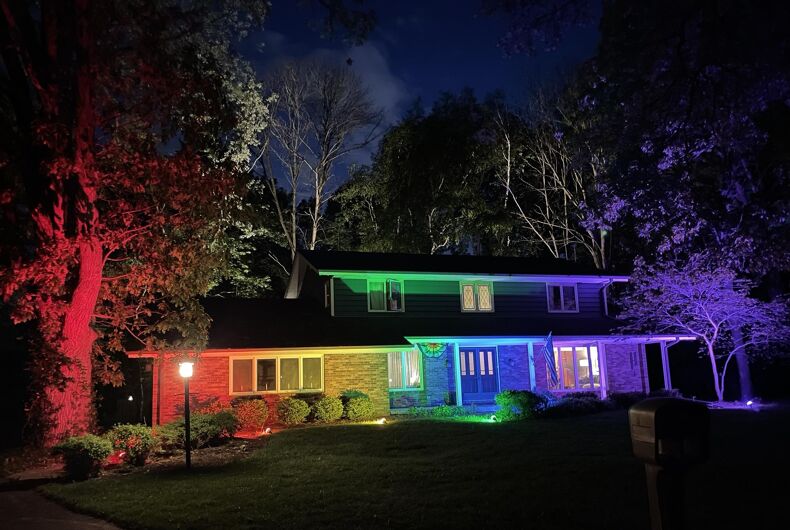 Reddit user memon17 posted this photo of their Wisconsin home after the HOA told them to take down a Pride flag.Photo: memon17

Reddit user memon17 wasn’t afraid to get creative after the homeowners association (HOA) passed a rule to ban flying any banners outside homes other than the American flag.

Instead, they decided to do something “a lot more fun.” They lit their home in rainbow colors using floodlights – and there’s nothing the HOA can do about it.

Related: A Texas bakery lost a big order over a photo of Pride cookies. Then the internet stepped in.

“Due to some neighbors flying BLM flags, Thin blue line flags, and other opinion flags, our HOA decided last month that we’re only allowed to fly the USA flag, and nothing else,” memon17 shared in the post. “The day after the decision, we receive an email that someone reported our Pride flag (that we had [o]n our house since 2016), and that we needed to take it down.”

“Looking through our new rules, we noticed that removable lights are permitted without restriction so… we bought 6 colored flood lights, and we washed our house in pride colors. A little less subtle than our simple flag. A lot more fun for anyone complaining about the flag itself and what it represents.”

The user later clarified that they aren’t upset with the HOA and understand the decision. In fact, they’re now on the board.

HOA won’t let us fly our modest Pride flag, so we just follow the rules. from MaliciousCompliance

LGBTQ fans are calling Disney out for celebrating Pride. Here’s why.