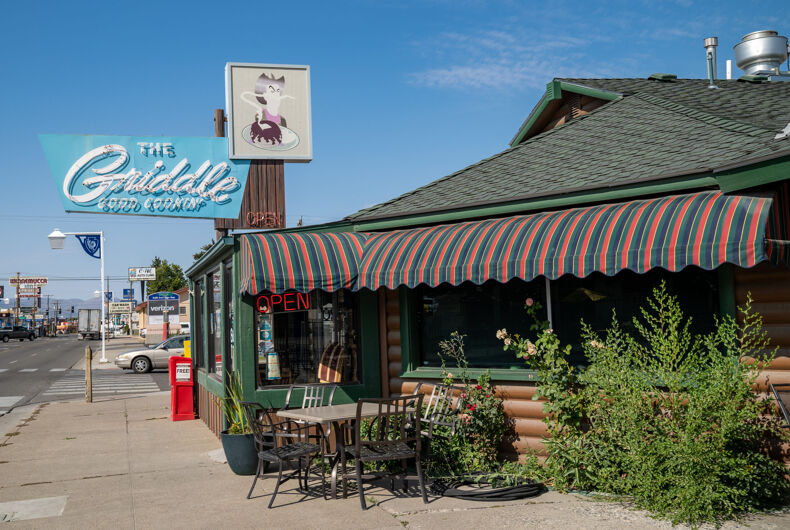 Many cities have been celebrating Pride for years, but for one small town in rural Nevada, this year will be the first time.

Winnemucca, Nevada will have its inaugural Pride parade and festival on July 16 and 17, complete with floats, a drag show and vendors from as far away as Carson City. The Winnemucca City Council has even agreed to close public streets for the parade.

The celebration was the idea of Shawn Dixon, the owner of a local nail salon in the town of 8,000. According to The Nevada Independent, Dixon had dreamed of organizing a Pride celebration for years but wasn’t sure she could pull it off. After she was diagnosed with cancer in March of 2020, she told the publication, she decided it was time.

“I was sitting outside one night after being sick from chemo, and it just hit me that it had to be done,” she said. “We have to have this, and I can do it.”

Dixon asked for help from her daughter, Kat Dixon, and friends Christina Basso, a teacher, and Misty Huff, a grocery store employee. At first, the Independent reported, they were just going to walk in public waving a rainbow flag and representing the LGBTQ community.

That modest walk grew into an event that now has its own Winnemucca Pride planning group; Winnemucca Pride stickers and T-shirts; a Twitter account, and a Facebook page with more than 400 members: Winnemucca LBGTQ+ Pride Festival. Families, friends, and allies are planning to gather for the parade at the intersection of 6th and Melarkey streets at 5:30 p.m. on July 16.

According to the Independent, Dixon has been out as a lesbian since 1991 and has been married for nearly 23 years to her wife, with whom she raised their daughter. She is the only LGBTQ member of the Winnemucca Pride planning group, the newspaper said.

Dixon explained that she was looking for a way to counter the invisibility that many feel in the LGBTQ community, especially in a small town.

“The significance is to show everybody that it’s OK to be you and to be loved and love who you want,” she said. “It’s important that we feel like we can be seen and feel like we don’t have to hide all the time. Because that in and of itself causes so many of us to go down into the dark place, and it’s difficult to get out of.”

Kat Dixon told the Independent that she was bullied and teased in school because she had two moms, and that made it important to be supportive as an ally.

“Having the community and vendors and an actual parade, it is kind of shouting: This is happening,” she said. “We want to make it known that they are seen by other people.”

For Shawn Dixon, getting the city council’s approval to close streets for the parade brought home the importance of what they were doing – and the support they have. Along with making Winnemucca’s Pride celebration an annual event and a model for other small towns, she’s also thinking about someday creating a permanent resource center in Winnemucca for LGBTQ kids and adults.

“I think we actually had a little moment yesterday, a kind of emotional moment where we realized that we are making history right now,” she said. “If we can do it in a rural area like Winnemucca…imagine what can happen throughout the world.”

One admirer who’s following the group’s progress is author Armistead Maupin, who was based in California for many years but now lives in England.

Maupin featured Winnemucca in his Tales of the City novels as the hometown of Anna Madrigal, the trans landlady who owned the fictional San Francisco apartment building where much of the action takes place. In Maupin’s books, Winnemucca was where Anna, then known as Andy Ramsey, was raised before transitioning, as the son of a brothel owner named Mother Mucca.

“This story is inspirational on so many levels,” Maupin wrote on Facebook this week about the Winnemucca Pride celebration and its organizers. “I stand in awe of these women.”