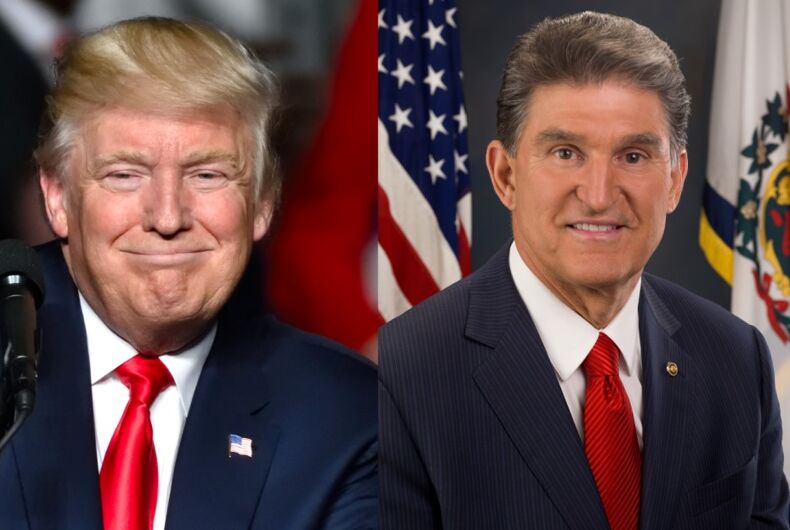 Donald Trump lavished praise on Sen. Joe Manchin (D-WV) for refusing to end the filibuster, a move that will probably kill the LGBTQ Equality Act and most major legislation on President Joe Biden’s agenda.

Manchin became Trump’s favorite Democrat despite Trump’s previous opposition to the filibuster, once calling it “stupid” and “very outdated.”

Related: Joe Manchin is quietly signaling that he may vote against the Equality Act

In the Senate, the filibuster has become a frequently used tool for the minority to block the majority from passing laws. Current Senate rules require 60 votes to end a filibuster even though only a simple majority – 50 or more senators plus the vice president as a tie-breaker – are required to vote for a bill itself for it to pass.

Since the Senate is split 50-50 between Democrats and Republicans, it means that 10 Republicans must cross party lines for most legislation to pass.

Currently Democrats are trying to get the For the People Act through the Senate. This bill would protect voting rights, a traditional Democratic priority that Republicans oppose since making it easier for people to vote makes it harder for them to win.

Sen. Manchin – who has already said that he wouldn’t vote to get rid of the filibuster – just wrote an op-ed saying he’d vote against the For the People Act itself because the bill “has garnered zero Republican support.”

He said that Democrats would do “very, very bad things” that “were unthinkable and were never even brought up during the election.”

Donald Trump praises Joe Manchin for “doing the right thing” by refusing to end the filibuster.

The filibuster is being used to stop an investigation of Trump's role in the January 6th coup attempt. pic.twitter.com/dsDzOCyaAZ

Those “very, very bad things” include the Equality Act, which would add sexual orientation and gender identity to federal anti-discrimination legislation, effectively banning anti-LGBTQ discrimination in many areas. The law is popular with the American people, but almost no Republican senators are expected to vote for it.

It’s dead unless the filibuster rule changes or a substantial number of Republicans change their minds about it. And Manchin’s statements about how he would vote against the voting rights bill itself because it hasn’t gotten enough Republican support suggests that there is almost no chance he would vote for the Equality Act, even if there were no filibuster.

Online, people called out Trump for previously calling for the Senate to end the filibuster. In 2017, he said that Senate Republicans “look like fools” for trying to get Democrats to cross over and support their legislation.

“Republicans must get rid of the stupid Filibuster rule — it is killing you,” he tweeted in 2018. Later that year, he tweeted at Sen. Mitch McConnell (R-KY) to “use the Nuclear Option and get it done,” referring to getting rid of the filibuster to get funding for a border wall between the U.S. and Mexico.

You'll never guess what Trump's position on the filibuster was the entire time he was president https://t.co/2ZGvfeFPVn pic.twitter.com/PfykiRNCQx

Support for marriage equality has never been higher among Republicans