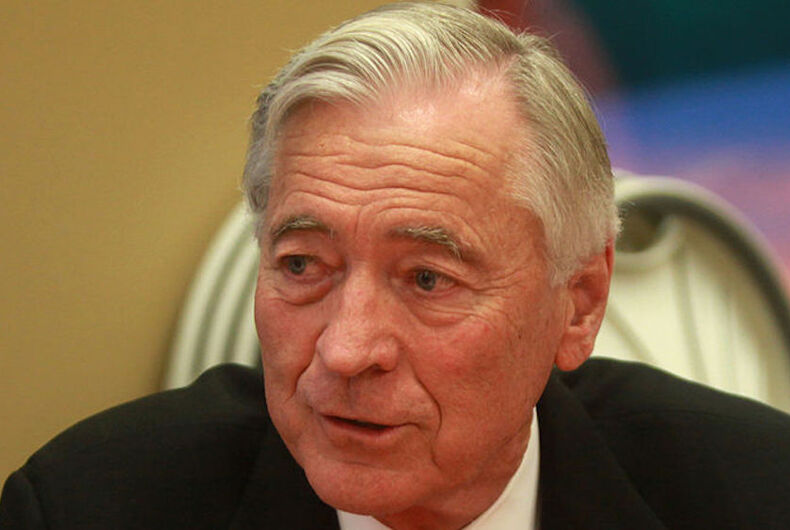 The ongoing “recount” taking place in Arizona is a delusional attempt to prove that former president Donald Trump did not lose the election there, despite mountains of evidence he did. The company requested by the Arizona Senate president Karen Fann (R) to perform the audit has no experience in election security — their owner already believes that the election was stolen from Trump.

The auditors, who give every indication of trying to prove voter fraud whether it exists or not, need to wear bright pink t-shirts so that they are readily identifiable during the process. That provided an opportunity for Randy Pullen, the former chair of the Republican state party who is co-leading the effort, to reveal his thoughts on trans people.

According to one process observer, Pullen said that the shirt “made him look like ‘a transgender.'”

Pullen told Business Insider that he thought it was “interesting” that the observer reported the comment, but he didn’t deny making it. Instead, he tried to pass his transphobia off as a joke.

“Apparently the observer lacks a sense of humor,” he said. “Too bad.”

It’s easy enough to classify Pullen’s remark as the kind of random anti-LGBTQ hatred that accompanies the far right, but it’s not just a happenstance of someone supporting the anti-democratic voter suppression efforts that Republicans are leading across the country — it’s a feature.

Republicans like to dress up their strategy to make voting harder as simply a matter of eliminating voter fraud, of which there is vanishingly little. In fact, it’s part of a broader effort to make the country conform to the right’s desire to keep the image of America as white, straight and conservative Christian.

If you don’t fall into any of those categories — and a lot of Americans don’t — their goal is to make sure you can’t jeopardize the conservative vision of Utopia by cutting you out of the process.

That may sound harsh. But it’s not by accident that Republicans like to complain about nonexistent voter fraud in big cities, where a lot of LGBTQ people live. In particular, Republicans have intentionally singled out cities with large Black populations, like Philadelphia and Detroit, as examples of the phantom fraud they are trying to prevent. It’s not even a dog whistle. It’s a bullhorn.

Pullen is a prime example of that overt bigotry. In 2015, Pullen had a racist suggestion on how to fight urban violence was to single out. “The best way to end the slaughter of young black men is to take guns away from blacks as they are the main killers,” Pullen tweeted.

Once again, Pullen tried to pass off his bigotry as a joke, claiming he was just being “sarcastic.”

Earlier this week, 100 scholars of democracy issued a “statement of concern” in which they said Republican-led efforts to undermine voting rights  “call into question whether the United States will remain a democracy.”

“Collectively, these initiatives are transforming several states into political systems that no longer meet the minimum conditions for free and fair elections,” the scholars said.

For Trump followers, that’s the whole point. The insurrection failed, so now they are trying other, equally destructive, means, to take control of America. In the long war against democracy, the insurrectionists are winning. And they are being led by anti-LGBTQ activists.

That casual transphobia that Pullen exemplifies is just the start of the attacks that are to come if the right succeeds in enforcing the kind of America it wants to see.