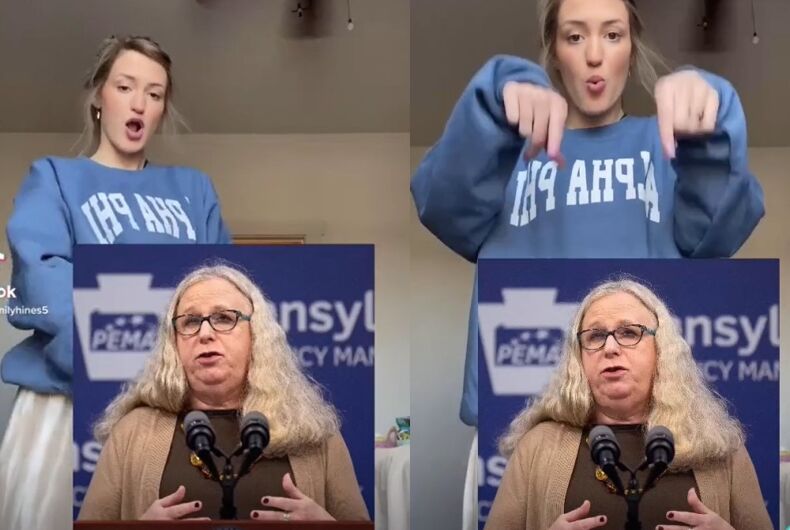 A college student in Louisiana was kicked out of her sorority for posting a transphobic video about U.S. Assistant Secretary for Health Dr. Rachel Levine to TikTok. And now she’s telling everyone who’ll listen that she’s the victim of censorship.

“It’s just them trying to censor the opposition out of existence, but it does the exact opposite, by fueling conservative voices to speak out even more, and louder,” Louisiana State University student Emily Hines told far-right website Breitbart News.

Despite the young scholar’s claims of censorship, the video she posted to TikTok was not exactly an intellectual argument. It was basically several seconds of her dancing in front of a picture of Dr. Levine while “More Than a Woman” by the BeeGees played. She pointed at the picture of Dr. Levine and mocked her as the songs’ lyrics – “more than a woman, more than a woman to me” – were heard.

Last month, she was called into a Zoom meeting with the Alpha Phi International Fraternity Delta Tau Judiciary Board to discuss violating the sorority’s rules against “inappropriate social media content.” She was wearing an Alpha Phi sweatshirt in the video, drawing attention to her membership in the sorority.

“They asked if I was remorseful at all, and I said I regret wearing the [Alpha Phi] sweatshirt, but was not going to apologize for my beliefs,” Hines said about the meeting.

Hines said that she was the victim in the meeting because the sorority’s chapter adviser just assumed that pointing at Dr. Levine and dancing – while implying that she’s not really a woman – was a personal attack.

“The chapter adviser crossed a line by telling me what my own intentions were,” Hines said.

She later got an email saying that the sorority was terminating her membership.

The video is no longer available on TikTok. In other videos, Hines claims that her content has been “shadowbanned” by TikTok because she’s conservative.

She is still keeping up the fight, threatening to beat up trans women.