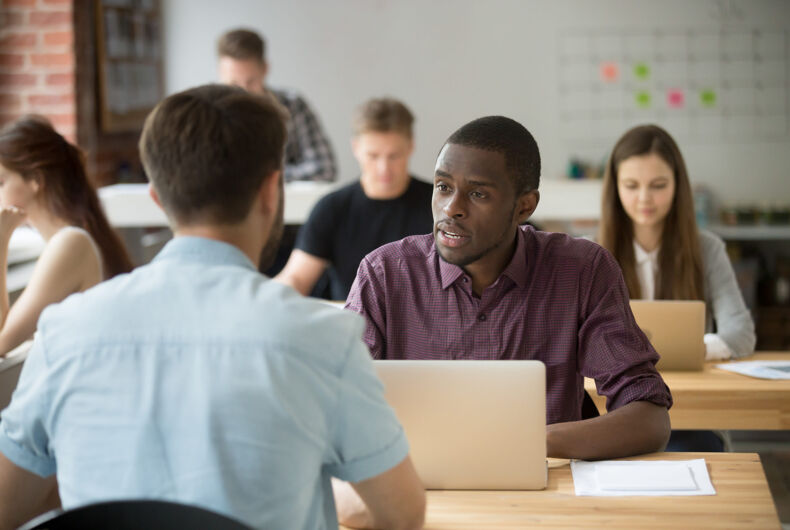 How many times during a woman’s life do people refer to her as “nasty” or “bitchy,” among other terms, to discount their opinions, experiences, and life stories if they stand up to patriarchal oppression and everyday acts of misogyny?

How many times d o you think, during the lives of people of color, Black people, or Indigenous people do others refer to them as “angry” or “mean” to dismiss their perspectives and life experiences if they stand up to white supremacy and everyday acts of racism?

How many times during the lives of LGBTQ+ people does this play out similarly?

Dominant groups maintain their control over minoritized identity communities by attempting to silence their voices. They immediately – consciously or unconsciously – attack counter-narratives that challenge the status quo.

I cannot count the number of times others have dismissed and discounted my voice by labeling me as a “radical leftist socialist,” “angry homosexual,” “privileged Jew,” and “someone who needs to get over the Holocaust because it happened so long ago!” Some have argued that “I am never satisfied” by the incremental progress made over the years, and I’m “never satisfied” by the actions people take to improve conditions.

While the latter is not necessarily true, depending on the circumstances, at the age of 74, I have come fairly far along in my development process. In establishing my sense of self I learned how not to internalize the destructive doubts in my perceptions as deeply as I did earlier in my life.

So, what does all this have to do with the state of our contemporary society?

Until and unless we listen with empathy and understanding to the voices of the marginalized and oppressed, we will not effectively and constructively use the current inflection point in our history. In addition, we must be willing to hear the voices of dominant group members in a setting of dialogue and understanding.

Debate, however, can interfere in the process of understanding the experiences and perspectives of others. The quickest way to shut down dialogue is to engage in debate. For example, my identities, life experiences, and perceptions are not up for debate: they are mine and I do not have to justify them to anyone.

In my university classes, I attempt to create a welcome and open climate where students feel safe and free to share their points of voice, to take risks when in other classes they may not have been given the opportunity.

I employ the six “building blocks” of intergroup dialogues (formulated by such notables as Cytron-Walker, Hurtado, Mark, Nagda, Schoem, and Zúñiga). These are:

Intergroup dialogues with trained facilitators have proven very successful in developing understanding among and between, especially in crossing identities. But we as individuals can also begin or further our process of clarifying our positions and experiences by listening and truly hearing the experiences and positions of others rather than immediately labeling others when their voices, their truths contradict or challenge our notion of reality.

When we fail to listen, truly listen, of course, people will seem “angry,” “mean,” “hostile,” or “standoffish.” Who would wish to be around people who attempt to silence them?