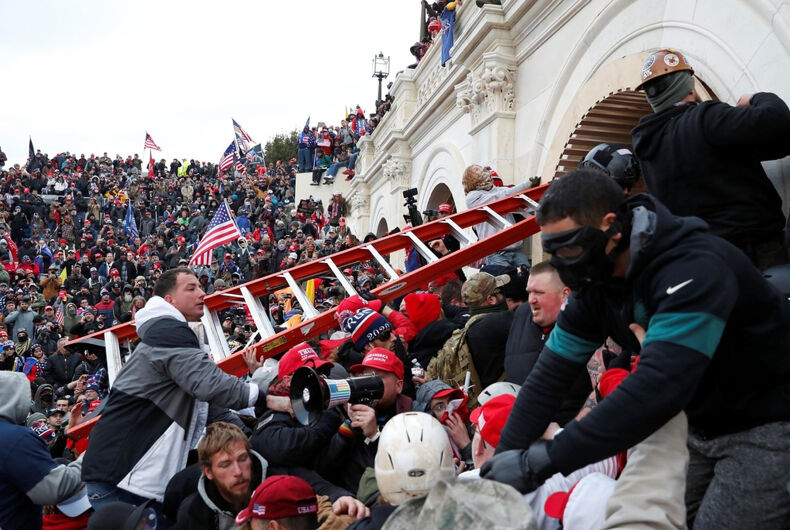 By any objective standard, the Republican Party is rapidly abandoning the basic principles of democracy. Republicans in state legislatures are introducing — and passing — bills to drastically restrict voting and override laws and court decisions that they don’t like. They are censoring free speech and academic inquiry, particularly as they relate to a reckoning about racism.

Meanwhile, in the Senate, Republicans just proved that they have no interest in investigating the January 6 insurrection at the Capitol. Faced with a literal assault on democracy, the overwhelming majority of Republicans decided that the party’s election chances were more important than democracy, and blocked the resolution from passing.

The Republicans’ boldness is enabled by systems that tilt in favor of the minority, including the Senate itself where North Dakota — with its 760,000 residents — has as much representation as California — with a population of 39.5 million.

The filibuster is the symbol of all that’s wrong with the system. By requiring almost all legislation to garner at least 60 votes to pass, instead of a simple majority, the filibuster benefits Republicans who want to grind the Democrats’ agenda to a hold.

The loudest advocates for maintaining the filibuster have been Sen. Joe Manchin (D-WV) and Sen. Kyrsten Sinema (D-AZ). Both have made the cry for bipartisan compromise into a political fetish.

In the process, they are strangling any hope for progress.

In particular, Sinema, who is bisexual, is ensuring that the Equality Act will never pass. She’s putting faith in bipartisanship over the interests of the LBGTQ community.

Manchin and Sinema reached a new low last week when they begged Republicans to support the creation of a commission to investigate the January 6 insurrection.

“We implore our Senate Republican colleagues to work with us to find a path forward on a commission to examine the events of January 6,” the senators said in a joint statement. The statement was more appropriate for a pair of third graders asking to be friends with a classmate who won’t invite them to a birthday party.

Senate Minority Leader Mitch McConnell (R-KY) had already made clear that the party needed to reject the commission because he knew it would harm Republicans. Sen. Lisa Murkowski (R-AK), one of the six Republicans to break ranks and vote for the commission, blasted McConnell for making everything about “just one election cycle after another.”

Meanwhile, Sinema didn’t even show up for the vote, and has yet to explain why.

You would think that the minority defeating the creation of a commission looking into an insurrection at the seat of democracy would be a bright enough red flag for Democrats.

“If you can’t get a Republican to support a nonpartisan analysis of why the Capitol was attacked the first time since the War of 1812, then what are you holding out hope for?” said Sen. Tim Kaine (D-VA), who supports eliminating the filibuster.

But the fact of the matter is that it’s not just Manchin and Sinema who are in love with the illusion of bipartisanship. The trappings of comity and collegiality seem to have a hold on a number of Democrats, even though Republicans have demonstrated time and again over the past decade that they care only about raw power.

Their ranks seem to include President Joe Biden, who spent decades working across the aisle — but in entirely different kind of Senate.

All 50 Democrats would need to vote to eliminate the filibuster. Doing so is the only way that any legislation is going to pass. That includes the crucial John Lewis Voting Rights Act, which would counter all the voter suppression efforts Republicans are undertaking at the state level.

“Democracy dying so the filibuster can live would seem a terrible way for this experiment to end,” David Plouffe, who was a top campaign and White House aide to Barack Obama, wrote on Twitter.

The flip side of abolishing the filibuster is that when Republicans are back in control, they will use a filibuster-free Senate to cram through all kinds of offensive bills. But McConnell would have no issue nuking the filibuster anyway to do what he pleases if he becomes Majority Leader again.

McConnell has already shown he’s willing to violate every other norm. You can just ask Merrick Garland.

A do-nothing Congress benefits Republicans, which is their strategy.

The trap that Democrats keep falling into is thinking of the Republican Party as a normal political entity. It is not. Nine years ago, political scientists Thomas Mann and Norman Ornstein called their descent into authoritarianism when they wrote an essay called, “Republicans are the problem.”

How much more will it take for Democrats to recognize the era of bipartisanship is dead?