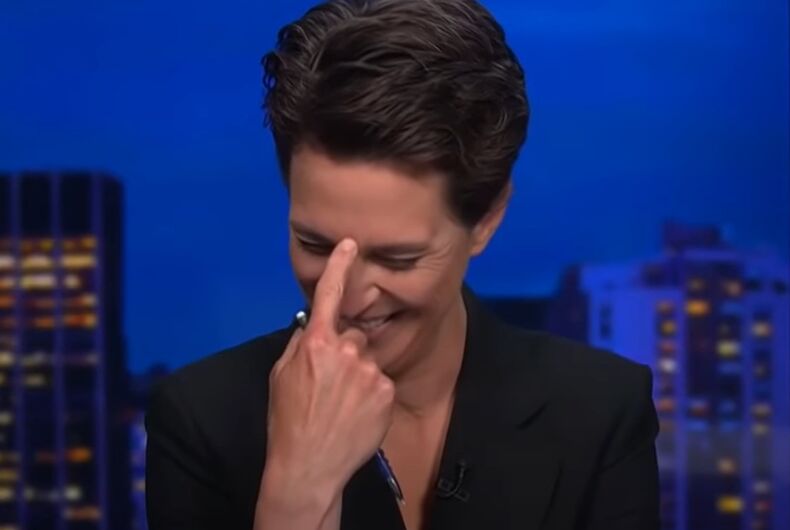 Rachel Maddow couldn’t contain her laughter as she called out the latest rightwing conspiracy theory about the 2020 election: that bamboo-laced ballots were flown into Arizona from Asia to steal the election for President Joe Biden.

“There’s accusation that 40,000 ballots were flown in to Arizona and it was stuffed into the box and it came from the south-east part of the world, Asia, and what they’re doing is to find out whether there’s bamboo in the paper,” John Brakey told reporters in a clip Maddow played on her MSNBC show.

Related: Rachel Maddow wants Joe Biden to “get petty for once” over COVID stimulus checks

Brakey has been defending the current ballot recount underway in Arizona’s Maricopa County. Republicans there believe that the state was stolen for the Biden campaign and are hoping to prove that in their bizarre painstakingly slow recount of the 2.1 million ballots cast in that county alone, despite the fact that even if Donald Trump had Arizona he would have still lost the election.

And now they’re bringing in anti-Asian racism and saying they’re checking ballots to see if they were made with bamboo.

“There you go. Trump’s president!” Maddow said sarcastically. “They’re looking for bamboo in the ballots because Trump is secretly president because China or maybe just Asia made bamboo ballots and flew them to Arizona and they can find them with a camera.”

“The Republican Party is on the verge of kicking out some of its house leadership because of insufficient loyalty to Trump. Donald Trump is now the animating focus of the Republican Party right now because of their absolute outrage he’s not allowed back on to social media to keep promoting the idea he secretly won the election.”

Bamboo is one of many plant materials that can be used in the production of paper and is not in itself indicative of where paper is made. It also goes without saying that paper produced in one part of the world can be used to print ballots in another part of the world.

Contractors at the Veterans Memorial Coliseum in Arizona – which work for a company called “Cyber Ninjas” – are running the ballots under microscopic cameras that are supposed to help them identify ink patterns, fibers, and wrinkles in the paper. Cyber Ninjas believes that this can identify voter fraud, but they don’t want to explain what they’re looking for, telling a judge that they don’t have to disclose that information because it’s a “trade secret.”

Election experts in the state are concerned that their strange methods will not produce accurate results, marking perfectly legitimate ballots as fraudulent. And while their recount won’t overturn the election results and Biden will remain president, their efforts are fueling conspiracy theories and attacks on the legitimacy of Biden’s presidency.